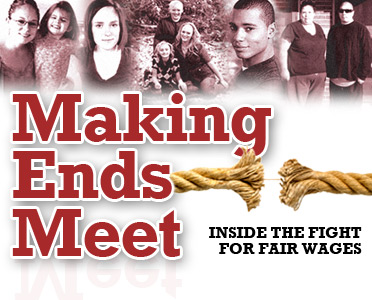 Today’s minimum wages are a far cry of what it actually takes to survive.

Last Thursday, thousands of fast food workers staged a strike in 50 cities across the country to draw attention to corporate wage gaps. Fast food workers are demanding $15 hourly wages; currently, the federal minimum wage is $7.25 an hour. Perhaps it is easy for profit-hungry corporations to forget, but low-wage workers are human beings; anyone working full-time should be able to make enough to live.

Low-wage workers, who are disproportionately women and people of color, are simply not making ends meet. Four out of 10 workers in America earning at or below the minimum wage are people of color.

The fast food industry routinely limits workers’ hours to avoid providing health care benefits. And this, despite a study showing industry revenues are up 12 percent over the past year, improving on the previous year’s 8 percent increase. In the overall economy, skyrocketing corporate profits are stronger than ever; in the past quarter alone, earnings have increased by nearly 19 percent, at $1.75 trillion.

“I know I’m risking my job, but it’s my right to fight for what I deserve,” Julio Wilson told USA Today. The Little Caesars worker makes a wage nearly $2 an hour more than the minimum wage, but it still falls far short of living wages. “Nine dollars an hour is not enough to make ends meet nowadays.”

The protest was staged on Aug. 29, the day after the 50th anniversary of the March on Washington in which Dr. Martin Luther King Jr. gave the “I Have a Dream” speech. While Dr. King’s words spoke to racial equality, the March on Washington also called for a $2 an hour minimum wage. Adjusted to 2013 standards, the demand would have called for a wage of $15.26 an hour.

Here are the facts: Full-time, low-wage workers are not earning enough to cover the cost of basic needs. People within these positions are working in a broken system that is unable to provide for costs of living.

The value of the minimum wage, which today amounts to $15,080 annually for a full-time worker, has decreased significantly over the past 50 years when adjusted to account for inflation and productivity. In the 1960s, the federal minimum wage was $1.60 per hour, which amounts to $10.75 in 2013 dollars. Minimum-wage workers are actually earning less than they would be in the 1960s for working the same jobs.

The minimum wage is a far cry from wages actually needed to survive. According to the Alliance’s annual Job Gap Report, a single worker with no children would need to earn $16.13 an hour to cover the cost of basic needs in Washington state.

But most don’t have a choice and must compromise on and redefine their basic needs. Despite millions of workers having to live off minimum-wage earnings, the wage floor was never intended to be a living wage. The formula that calculates the federal minimum wage was derived in 1964. The minimum wage does not effectively account for the modern cost of living in 2013, as inflation and individual expenditures have increased dramatically since the 1960s.

Though low-wage jobs do not equate to living wage jobs, they are the jobs that are available to those aspiring to make an honest living. About 58 percent of all jobs created post-recession are low-wage jobs; the Economic Policy Institute predicts that, by 2020, 25 percent of workers will be in low-wage positions.

There is much at stake in the movement for fair wages. The Restaurant Opportunities Center calculates that 3 million people of color could be lifted out of poverty with a $10 minimum wage.

People working in these positions cannot simply get better jobs; higher-wage jobs are unavailable and low-wage workers are operating in a failing economic system.