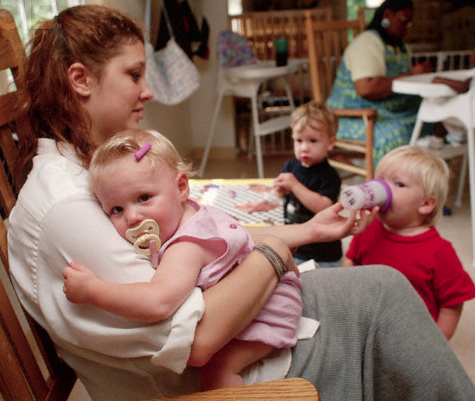 What does it take to make ends meet?

For workers making less than $15 an hour – which is about 40 percent of all workers in the United States – housing, food, and transportation are all major expenses. But for a working parent with young children, one of the biggest expenses is likely to be child care.

For minimum wage workers, the cost of child care is an impossible burden.

The cost of child care for a school age child and a toddler is equal to more than 65 percent of a full-time minimum wage worker’s earnings in the 10 states included in the Alliance’s November 2014 report, “Equity in the Balance,” and is over 100 percent of their earnings in Colorado, Virginia, Connecticut, and New York.

When working parents don’t have a family member or friend who can look after their children for free or low cost, they have to pay for reliable child care. Although child care workers are among the lowest paid workers, earning a median wage of only $9.38 per hour in 2012, the cost of child care for parents is significant.

In the 10 states included in the Alliance’s 2014-2015 Job Gap Economic Prosperity Series, child care costs make up a large portion of the cost of living. In states we studied, paying for before-and-after- school and summer care for a 6-8 year old ranges from $3,440 per year in Idaho to $8,347 per year in Connecticut.

For a toddler, the cost of full-time child care ranges from $6,430 per year in Idaho to $13,844 in Connecticut. When parents have two children, nearly every state studied has a cost of over $10,000 per year, with New York (not including New York City) and Connecticut costing over $20,000 per year. (See chart at end of article).

While it’s true that many minimum wage workers are eligible for subsidized child care, a 2012 brief by the U.S. Department of Health & Human Services estimated that only 18 percent of children from eligible families actually received subsidies.

Because the most states allow providers to charge parents the difference between the subsidy rate and their standard rate, many parents who receive subsidies still must pay more than the subsidy co-pay, cutting deep into the already meager budgets of minimum wage workers.

In addition to the struggle minimum wage workers have affording child care, many states have restrictions on receiving subsidies when a worker loses their job or when they are unemployed and looking for work.

As the National Women’s Law Center shows, five states cut off subsidies after a parent loses their job, and another seven provide less than one month of subsidy after job loss. Further, 35 states and the District of Columbia do not provide any subsidies when a parent is unemployed, but actively searching for work.

Over the next few months, the Alliance for a Just Society will be taking a look at some of the components that go into calculating a living wage, and show why it’s impossible to make ends meet working full-time at minimum wage.