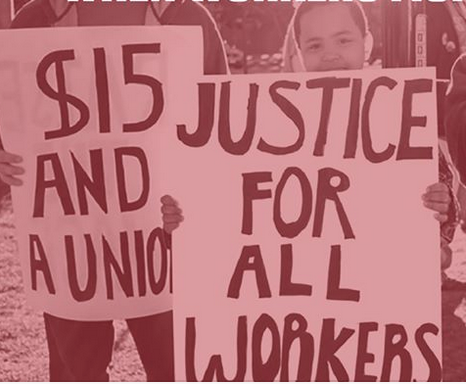 Hard work by our affiliate Citizen Action of New York – along with dozens of other allied organizations and unions, and thousands of workers who took to the streets and shared their personal stories – has paid off  in a huge victory.

Fast food workers are paid less than any other occupation, and fast food work is projected to be the second largest growing occupation in the country, with more openings than nearly any other. 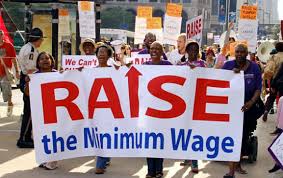 Spring is in the air. That means cherry blossom season in Washington. It also means fly-in time, when the nation’s biggest trade associations hold their annual lobby days. Case in point: the National Restaurant Association (NRA) is hitting town at the end of April.

Topping the Restaurant Association’s agenda? Stick a fork in the proposed minimum wage increase. The NRA has an impressive track record on this issue: Congress hasn’t voted to increase the minimum wage since 2007, and the tipped minimum wage that applies to many restaurant workers remains frozen at $2.13 an hour… where it’s been stuck since 1991.

But on its lobby day, the Restaurant Association will likely showcase “mom and pop” restaurants instead of corporate chains. If you’re going to lobby against a publicly popular issue like a minimum wage increase, it’s better optics to say you’re speaking for the corner bakery than corporate chains like Taco Bell and Olive Garden.

So, on its fly-in day, the NRA will cultivate a Main Street image. But the other 364 days of the NRA’s year feature a different main ingredient: Washington insider influence-peddling that stacks the deck against low-wage workers.

The NRA’s choice of lobbyists reflects a commitment to using the best ingredients, netting four mentions on The Hill’s Top Lobbyists list for 2013. Or, you might say, the best-connected ingredients. The “secret sauce” behind the NRA’s lobbying success? A heaping helping of revolving door influence.

Nothing symbolizes influence-peddling in Washington like the revolving door between Congress and K Street – it’s like Washington’s version of insider trading. Despite reforms passed in 2007, the revolving door spins faster than ever: according to the Sunlight Foundation, the share of active contract lobbyists who are revolvers increased from 18 percent in 1998 to 44 percent in 2012.

And, when it comes to using the revolving door to cook up insider influence, nobody does it like the National Restaurant Association.

Indeed, when the NRA doubled its lobbyist count, it didn’t just pluck any old suits off the D.C. streets. It made a concerted investment: all the growth came from a four-fold increase in “insider trading” (ie, revolving door) lobbyists, from 6 in 2008 to 27 in 2013.

The NRA’s 2013 insiders included nine “rapid revolvers” (who jumped from government jobs to lobbying jobs the same or the following year), six former congressional chiefs of staff, six former legislative directors, and various senior advisors, according to the Center for Responsive Politics.

The Restaurant Association’s members have invested heavily in insiders, too: the companies listed above tripled their combined revolver count from 28 to 91 over 1998-2013 (their non-revolvers only increased from 28 to 36). Talk about super-sizing your insider influence.

So the Restaurant Association and its biggest members together have more than a hundred “insider trading” lobbyists pushing their agenda in Congress. How many do minimum wage workers have, again?

If it seems surprisingly hard to raise the minimum wage, despite overwhelming public support, we’ll know why. The restaurant industry’s legions of revolving door lobbyists are trading on their insider influence to keep any wage increase right where the NRA wants it: in the deep freezer.

LeeAnn Hall is the executive director of the Alliance for a Just Society, a national organizing and policy network that works with state-based organizations to build campaigns for economic and racial equity. Saru Jayaraman is the Director of the Food Labor Research Center at UC Berkeley, the author of national best-seller Behind the Kitchen Door, and co-founder & co-director of Restaurant Opportunities Centers United (ROC United).

This opinion piece first appeared in The Hill.