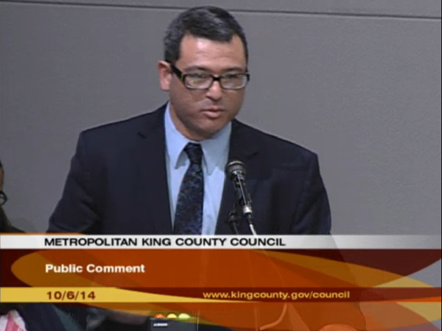 SEATTLE — The King County Council yesterday approved a living wage ordinance, which, when signed by County Executive Dow Constantine, would be among the stronger county-level ordinances in the country.

The Alliance for a Just Society and Washington Community Action Network have supported the legislation, which includes language citing Alliance living wage research. The legislation sets a wage floor for King County employees and service contractors for contracts worth $100,000 or more.

In August, the Alliance and Washington CAN! jointly released “Families Out of Balance,” which presented the most recent living wage numbers for King County and Washington state. The report finds that the hourly wages for full-time workers needed to make basic ends meet in King County ranges from $17.37 an hour for a single individual to $34.46 for a single adult with two children.

In that context, the Alliance and Washington CAN! believe the wage floor set by the county ordinance to be modest when compared to actual living needs for workers.

The wage schedule would be on par with Seattle’s recently adopted $15 minimum wage, which an Alliance analysis previously found to still fall short of meeting basic needs.

The 5-4 vote, which split along party lines, was covered by the Seattle Times:

“We applaud the council for taking this on. There is a lot of symbolism in the county making this statement,” said Ben Henry, senior policy associate at Alliance for a Just Society, a Seattle-based advocacy organization. “This is a step toward paying people what they need to make ends meet.” …

The council, which is reviewing Constantine’s budget, took up the living-wage legislation while considering a report published this summer by the Alliance for a Just Society.

The “Families Out of Balance” report found that a single adult in King County with no children and a full-time job needs to earn more than $17 an hour — about $36,000 a year — to make ends meet while saving 10 percent of his or her income.

While the exacts of the approved ordinance are convoluted, it sets a schedule identical to Seattle’s $15 minimum wage law, and the move is being touted as a win by progressive groups like the Alliance for a Just Society and Washington Community Action Network. In a press release issued before the vote, the Alliance called the legislation “among the stronger county-level ordinances in the country,” and “on par with Seattle’s recently adopted $15 minimum wage.” Alliance Director Jill Reese said the ordinance “is a modest step in the right direction.” …

According to Ben Henry, a Senior Policy Associate at the Alliance for a Just Society, today’s action was mostly about sending a message.

“This is the King County Council making a statement,” Henry tells Seattle Weekly. “While this is a step in the right direction, even a wage floor at this historic of a level still falls short of providing basic needs. … We see it as a continuation of the living wage conversation.”

A report issued in August by the Alliance for a Just Society and Washington Community Action Network found that a full-time worker in King County needed at least $17.37 an hour to meet basic needs, and for an adult with two children it rises to $34.46 an hour.

Both the Alliance and Washington CAN! were on-hand to testify in support of the legislation. Here is my testimony:

And Washington CAN! Legislative Director Mauricio Ayon testified, “our members have identified rising costs of health care and housing as the top two reasons our families are struggling through this economic recovery”:

Council Chair Larry Phillips credited the Alliance and Washington CAN! for our work on the bill:

As families struggle to gain access to actual living wages, they are forced to make excruciating decisions on which basic necessities to cut. Here are our King County living wage findings:

This legislation serves as a benchmark for other counties as among the strongest in the country, in terms of the $15 wage threshold and who qualifies (contracts worth $100,000 or more).