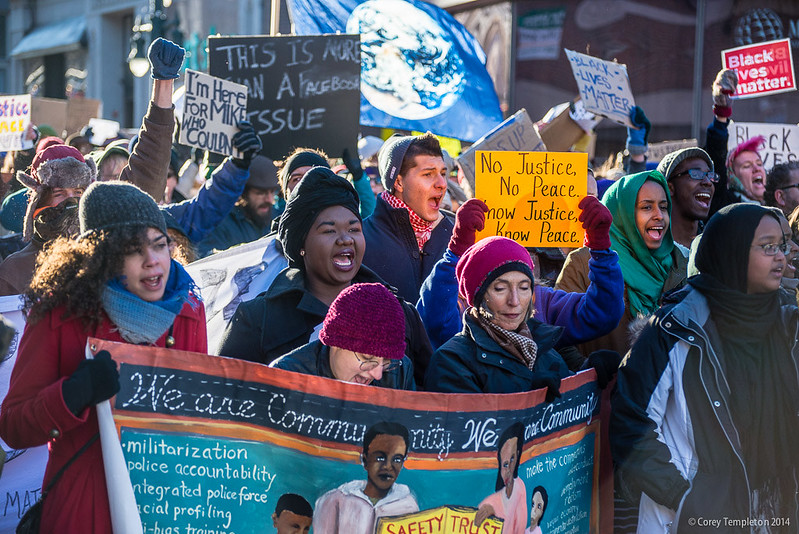 In his 1998 article “The Last Stop Sign,” the Oakland-based organizer Gary Delgado issued a friendly provocation: organizers must directly take on race and racism.

The dominant traditions of community organizing at the time, especially as practiced by the leading national networks, prioritized issues that promised to unite neighborhoods and constituencies. The ubiquitous campaign to demand a new stop sign on a busy street was the exemplar. The most effective organizers were said to be “non-ideological”; they avoided controversial issues that might divide a group’s members. Racial “colorblindness” (celebrated across the political spectrum in the 1990s and early 2000s) was the default organizing position.

END_OF_DOCUMENT_TOKEN_TO_BE_REPLACED

Grassroots organizers look to seize the momentum of the infrastructure legislation and heightened awareness of equity issues to improve public transportation access.

Q&A by Dan Zukowski at SmartCitiesDive

With the Black Lives Matter movement heightening awareness of racial and social inequities, and with the recent challenges facing essential workers who rely on public transit, the issue of transit equity has come to the forefront of conversations surrounding pandemic recovery.

But some organizations and individuals have long advocated for accessible, affordable and equitable public transportation. Among those advocates are LeeAnn Hall and Libero Della Piana of Just Strategy, a Seattle-based team of grassroots organizers.

END_OF_DOCUMENT_TOKEN_TO_BE_REPLACED

Alliance for a Just Society creates workshops and educational sessions to develop the capacity of movement leaders and staff. Our 400 Years of Racism & Resistance in Virginia workshop uses history to help participants understand the nature of systemic racism and the opportunities to challenge it today.

The Build Back Better plan’s historic investment in public transit would have a tremendous positive impact.

If you follow the news about President Biden’s Build Back Better agenda, you might have heard a lot about its 10-year price tag. But you probably haven’t heard much about what it would actually do.

The bill will invest in care for children and seniors, cover more health care under Medicare, make the tax system more fair, and address the climate crisis. Those parts get some coverage, and they’re all worth doing.

END_OF_DOCUMENT_TOKEN_TO_BE_REPLACED

Executive Director of the Alliance for a Just Society, LeeAnn Hall was recently a guest on The Movement Podcast. She reminds us that it is people’s lived experiences that help define what barriers to access exist and highlights the importance of community leadership to illuminate the solutions.

The Movement · 127 This Isn't a Sprint, It's a Long-Distance Race with LeeAnn Hall

LeeAnn Hall and Libero Della Piana from Alliance for a Just Society were featured in a forum on the national campaign to transform public transit funding priorities.

The goal on grassroots advocates and riders organizations is the shift funding towards public transit as a public good to advance equity, the environment, and the economy.

Build Back Better with More Bus Service from NACTO on Vimeo.

Recently, Executive Director LeeAnn Hall participated in a panel hosted by the National Association of City Transportation Officials (NACTO). The panel discussed how federal support for transit operations can transform communities and how funding operations is critical to “Building Back Better” and meeting Biden’s equity, climate, and workforce goals.

Transit is an essential public service for all of us, not only those who ride it. Throughout 2020, 2.8 million essential workers relied on transit workers every day in the worst days of the pandemic. Transit has been and will be the backbone that connects communities and is essential to economic recovery in cities large and small.

END_OF_DOCUMENT_TOKEN_TO_BE_REPLACED

Q: When so many African Americans are brutalized and murdered by the police, how do you explain the powerful wave of anger sparked by the death of George Floyd?

I think there is always a breaking point for oppression. We have reached the breaking point. Black people have learned to live with the outrage, with constant harassment, jail, and death. Often times the police killings are localized and isolated. They don’t make it to the national consciousness. The first time that reality changed was with the Rodney King beating in 1992. Black people knew the experience of police harassment and brutality, but to millions of Americans, it could be ignored or dismissed. Then suddenly it was on camera. Then as now, we assumed the evidence of police crimes on tape would lead to justice. When they didn’t in the case of Rodney King, Los Angeles erupted. Now, nearly 30 years later the killing of George Floyd has ignited the anger of the whole country in an unprecedented way.

END_OF_DOCUMENT_TOKEN_TO_BE_REPLACED

The photos of thousands of Wisconsin voters wearing masks and socially distancing while lining up to vote in last month’s primary election is one of the starkest images of the current pandemic. The image also embodies one of the main questions for the United States in the months to come: How will COVID-19 impact the November elections?

Can our movements create new openings in this moment to expand the electorate and make voting rights a public good? Or will the crisis further isolate communities that have historically been barred from access to electoral and governing power? Is now the time to redefine voting rights as a public good instead of a narrow privilege?