Fifty years after President Lyndon Johnson announced a War on Poverty in America, more than 46.5 million people in our country, 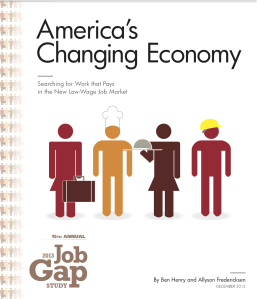 about one out of every seven, still struggle to get enough to eat or have a place to live. The U.S. Census Bureau shows that for people of color, the poverty rate is even higher, with one out of every four people who are black or Latino living in poverty.

Programs like Medicare and Medicaid that were created to fight the War on Poverty have helped millions of people. Strengthening both of those programs continues to be a critical part of protecting families. But the battle plan for keeping families safe and secure also has to include another key element: a significantly higher minimum wage – an actual living wage.

A large proportion of the jobs that have been created since the recession have been low-wage jobs – a disturbing trend that has pushed even more people into poverty. Our 15th annual Job Gap study, America’s Changing Economy, finds that 4 million jobs paying over $15 an hour were lost between 2009 and 2012. They were replaced with 3.6 million jobs paying below $15 an hour during that same period.

In the 10 states covered in the report, $15 was the minimum pay needed to support a single adult working full time; in most states the number was closer to $16. Two parents, working full time and raising two young children, need to make close to $20 an hour each to provide for their family.

Just what is a living wage? The Alliance for a Just Society believes the standard should be the basic American value that everyone who works a full-time job earns enough to live, and not merely enough to survive.

A mom working 40 hours a week shouldn’t have to depend on public assistance and the food bank to make ends meet for her and her child. Two working parents shouldn’t have to turn to a high-interest, high-risk payday lender if their car breaks down and they need to have it repaired so they can get to work.

A full-time employee shouldn’t have to worry about where money for rent will come from, or have their life turned upside down by a winter heating bill or buying a new tire for their car.

So in the 15th annual Job Gap Study produced by the Alliance for a Just Society, we use a formula for a living wage that not only includes basic needs like housing, food, transportation, and child care, but also money for miscellaneous expenses and a small savings to help workers manage unexpected expenses.

The household budget used in the Alliance report is still frugal. It doesn’t include a cell phone, cable, or Internet. It also doesn’t include repayments on student loan debt, a heavy burden for minimum wage workers – 44 percent of whom have some college experience.

Our living wage is a conservative calculation, but it provides enough income for workers to build a measure of economic security for their families.

These workers are the familiar faces we see everyday, fast food and restaurant servers, retail clerks, hotel workers, airport baggage handlers. They are office staff and city employees. Some are young people working their first jobs, and college graduates trying to pay off college loans. But many more are mothers and fathers trying to provide for their children.

Legislation like the Fair Minimum Wage Act of 2013, that Sen. Tom Harkin (D-Iowa) and Rep. George Miller (D-Calif.) pushed last year and plan to reintroduce this year, would help lift wages for millions of workers. The proposal would gradually increase minimum wage to $10.10 per hour over a two-year period. The bill has drawn support, notably from Jeff Merkley (D-Ore.) who has been speaking up about a higher minimum wage in his home state this week.

Not all Democrats have come on board. Now is the time to contact your legislators: send a link to our Job Gap Report, and urge them to support a minimum wage increase that would help families stand on their own.

Increasing the minimum wage at the local, state, and national level to an actual living wage is a critical step in helping families move from survival into security. And, it puts all of us on course to finally win the War on Poverty.

Allyson Fredericksen is a Policy Associate at the Alliance for a Just Society.