This is the first in a three-part series by the Alliance for a Just Society, looking at the high cost of student debt for our country and for our future. 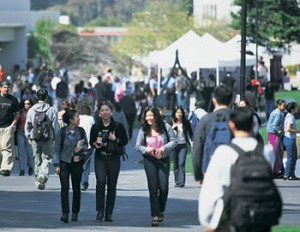 Young college graduates are putting their futures on hold as they struggle under the burden of high student debt – and a weak economic recovery that has failed to provide good jobs for them. Young adults in their 20s and 30s are delaying buying houses, cars, furniture or starting families. The implications for every family, and our nation, are huge.

Student loan debt has passed $1.2 trillion, according to the Consumer Financial Protection Bureau. Such widespread indebtedness has many causes and the ramifications are pervasive – including a decline in purchasing power.

High levels of family debt also often cause an increase in other types of debt, such as credit card and medical bills, due to an already too-tight family budget. Student debt has doubled since 2007 from $10,649 to $20,326.

Many are like Dave Robson, who was carrying nearly $50,000 in loans after four years of college and another year of graduate school. As a biologist, he quickly found a job in the burgeoning biotech field. But even fully employed, getting ahead financially was difficult with the $300 month loan payment each month.

In 2007, Robson was laid off from his job at a pharmaceutical manufacturer. Finding work that paid enough to support him and his debt load proved impossible in the tough economy. After years of making payments, and working with his lender to defer payments, his balance has actually increased to over $62,000.

So how did we get here? The answer is a sordid tale in modern politics. Since 1980, the amount that states have invested in higher education has been on a steady downward slope. Only Wyoming and North Dakota have managed to marginally increase the amount of their state budget that is dedicated to higher education.

Meanwhile, the cost of college tuition has exploded – greatly outpacing inflation. At state flagship universities, adjusted tuition and fee charges have increased by 247 percent. Tuition at community colleges – once considered an affordable option in reach of nearly everyone – has increased 164 percent.

Double that if the student needs to pay room and board. Add in books, and one year at a state college can easily cost $20,000. The cost can double or triple if the stuedent goes to college in another state.

These compounding forces require college students to rely on loans. Parents’ savings, scholarships, after-school and summer jobs are no longer enough to cover the cost of college.

The cost of a college education is climbing, and states are investing less, just at a time when jobs that pay a living wage are disappearing. And as many are finding, a college degree is no guarantee of a job. 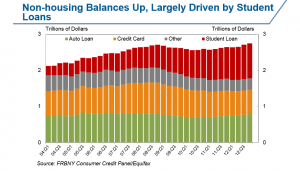 Not surprisingly, with fewer jobs paying a living wage, delinquencies for student loans are climbing. In the fourth quarter of 2012, 11.7 percent of student loan balances were delinquent for 90 days or more, up from 11 percent in the third quarter.

The number of 25-year-olds with student debt increased to 43 percent between 2003 and 2012 – up from 25 percent. In fact, student debt is the only form of household debt still climbing after the recession. Credit cards, mortgages, and auto loans have all begun to return to traditional levels.

The Alliance’s annual job gap study: America’s Changing Economy calculates how many living wage jobs are available compared to the number of applicants, shows how bleak the job market is.

The Job Gap report shows that for every one job that pays $15 per hour nationally there are seven applicants. This means students are promised a bill of goods that doesn’t exist. After taking on massive amounts of education debt they are then inserted into an economy that can’t sustain it.

When young people are deep in debt, our entire national economy is at risk. The student debt debacle may be the next bubble to burst.

Part 2 of the Student Debt series will explore the risk to the economy.

Part 3 will explore solutions to the debt crisis.