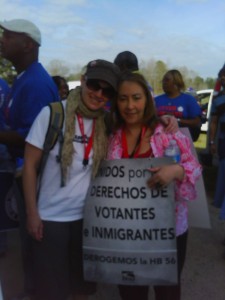 In 1965, the American South was a battlefield for civil rights.  A wealthy elite sought to block the rights and voice of the Black community.  This battle reached a tipping point in Alabama over the basic right to vote.

The more things change, the more they stay the same.  Almost fifty years later, many states have launched an undemocratic attack on workers’ rights, voting rights, and immigrant rights.

In 2010, Arizona law-makers passed the infamous legislation SB 1070, which heightened racial profiling by increasing collaboration between the police and immigration officials. Soon after this, Alabama passed the toughest anti-immigration law in the country. In 2011 we saw an attack on labor rights that began in Wisconsin, while at the same time we experienced multiple attacks on voting rights throughout the country.

In 1965, the march from Selma to Montgomery changed the course of American history. In March of 2012, members of the Alliance for a Just Society marched that same path to change history again, joining thousands of immigration activists from all across the country. AJS affiliate members including Make the Road NY, Washington Community Action Network, Colorado Progressive Coalition, Progressive Leadership Alliance of Nevada, and the Idaho Community Action Network participated during the reenactment of the Selma to Montgomery march to demand the protection of voting rights, workers’ rights, and immigrant rights.

The long march began on March 4th. Each day had a different theme, but all of them focused on labor, voting, and immigrant rights.  The march ended with a rally outside the Alabama’s state Capitol building, led by national personalities like Martin Luther King III, Dolores Huerta, Jesse Jackson, Al Sharpton, and Eliseo Medina.

The following day, the Alliance for a Just Society was invited to participate in a Black-and-Brown strategy session, facilitated by Bill Lucy, president of CBTU, and Eliseo Medina of SEIU.  Recognizing the strategic importance of building a Black and Brown alliance, leaders from those communities met to explore ways we might all continue working together.

By the end of the day, we identified several opportunities to align together, including:

To read more about the march, you can go to the following links: