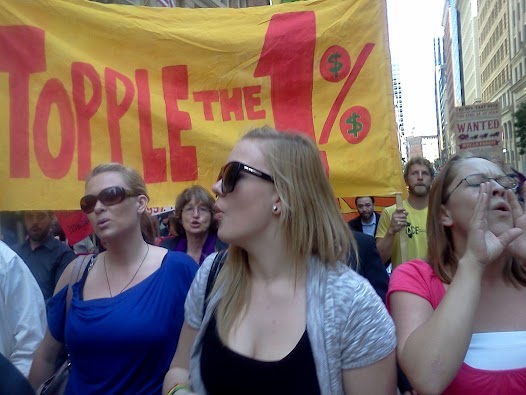 This spring, the Alliance for a Just Society participated in Shareholder Spring, in which grassroots leaders descended on shareholder meetings to demand an end to corporate dominance of our politics and our increasingly unequal economy.

In April, we sent 18 protestors to crash the Wells Fargo shareholder meeting in San Francisco, where grassroots leaders and allies demanded that the banking giant “stop buying our democracy with political contributions.” As this was unfolding, Leni Juca, member of Small Business United and Make the Road New York, penned an op-ed for the Nation online about Wells Fargo’s support for private prisons and detention centers.

On May 16, the Main Street Alliance helped put the issue of money in politics front-and-center at the heated WellPoint shareholder meeting, sending a letter to CEO Angela Braly that demanded disclosure of the company’s secretive political spending.

Two days later, Organize Now released an Alliance report focusing on Coventry’s political dollars – compared to health care spending – at the insurer’s shareholder meeting in Florida. This action was coordinated with Health Care for America Now, which focused on an end to political spending as its top demand.

This groundswell has helped change the way that the press and corporate actors talk and think about corporate dollars flowing into politics. As relayed on Politico Influence, at a recent conversation sponsored by the Conference Board, corporate players talked political spending, with one participant “urg[ing] corporations to specifically steer clear of super PACs, in part because doing so is ‘going to open up a slippery slope for more shareholder activism.’”

It’s time, though, for shareholders to have a say in how corporations spend money on politics. Last spring, the Securities and Exchange Commission (SEC) issued a “no-action letter” that protected the right of shareholders to put Home Depot’s political spending policy to a vote. The SEC rejected Home Depot’s argument that campaign contributions represent an ordinary business matter that the company could exclude from its proxy statement.

This was a step in the right direction, but of course there’s still lots more that can be done, even in our post-Citizens United world. For one thing, the SEC can require companies to disclose political spending to their shareholders, as recently requested by a group of 10 corporate and securities law professors. And Congress can go the extra mile by passing the Shareholder Protection Act, which in addition to requiring disclosure would guarantee the right of shareholders to approve – or veto – their company’s political spending.

As illustrated by the vibrancy of Shareholder Spring – and acknowledged at the Conference Board conversation – the time is ripe not only for shareholder activism but also for action on the part of regulators and lawmakers. They are, after all, supposed to represent the people and not the corporations.