On August 2, members of Alliance affiliate Idaho Community Action Network successfully disrupted the foreclosure auction of ICAN member Ashlee Wemhoff’s home in Lewiston, Idaho.  Ashlee’s home was put into foreclosure after her husband had an accident and was unable to work.

Idaho Community Action Network members swarmed the Alliance Escrow and Title office in Lewiston demanding that the title company sell the home back to Ashlee instead of auctioning it off.  After a short wait, a representative of the company told the ICAN group that the home wouldn’t be auctioned off and would instead revert back to Bank of America and they would take “reasonable offers.” 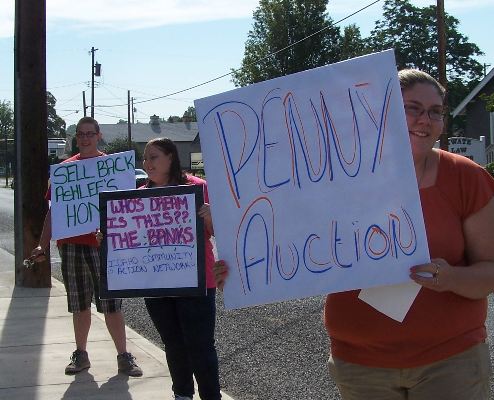 It was a victory for Ashlee and for ICAN to stop the imminent auction of her home, but other systemic questions remain. For example, the Wemhoff home was set to be auctioned off at $142,000 even though a recent appraisal set the property at $122,000.  This lends further credence to the demand that banks write down the principal owed on homes across the country to market value.  Principal write-down for America’s homeowners could create a million jobs and inject around $1M in the economy each year, according to the Win/Win report.

Recently Ed Demarco Director of Federal Housing and Finance Agency has recently said that he would not allow Fannie Mae or Freddie Mac to reduce principle.  With the vast majority of home mortgages being owned by Fannie and Freddie, any significant reduction of principle must include them.  Recently a study by the U.S. Treasury found that mortgages with principle reduction have a much lower rate of default.