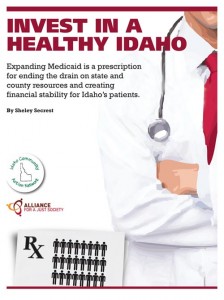 When the Supreme Court ruling on the Affordable Care Act was announced this past summer, millions of Americans who had been waiting for relief were struck a surprising blow. Every state in the country could decide whether to implement the expanded Medicaid program outlined in the law, or not. Despite the fact that the federal government will cover 100 percent of the costs from 2014-2016, and over six years reduce that coverage to 90% by 2020. Many states have opted into the program, others are playing politics by opting out. Idaho has not decided what it will do.

The stories in this report, an update on the Medicaid needs in Idaho, shed light on real people grappling with the real life struggle of being uninsured. “Their testimonials offer a glimpse of the tragedies that thousands of Americans face when addressing their health needs.” Read the Report.
Medicaid Expansion Idaho