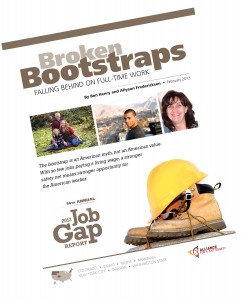 “Broken Bootstraps: Falling Behind on Full-Time Work,” is the 14th annual installment of a joint study by Alliance for a Just Society and its affiliates in 7 states.

Unemployment rates in all states are still high. A modest $9.00/hr. minimum wage has been mentioned at the federal level. Even that income would leave most low-wage workers needing to utilize public assistance programs. Where a living wage would allow families and individuals the opportunity to cover their expenses, save money and plan for their future.

But what we have seen at each juncture is that the lowest wage earners are hurt time and time again by so-called fiscal reforms.  American workers have paid well over their fair share.

All the tax breaks and loopholes enjoyed by so-called job creators have done little to increase employment opportunities. In all states, there are more people looking for good paying jobs than there are job openings and that has to change to turn this recession around. At the same time states have cut their safety nets year after year and that has hurt the lowest wage earners everywhere. The combination will further impact working families when states prioritize these tax breaks for the wealthy over critical supports for workers.