On Monday, Alliance members from Colorado Progressive Coalition and Washington CAN!  joined over 500 homeowners for a day of action targeting the Department of Justice for its continued failure to prosecute Wall Street banks and their executives for major financial crimes.  In March, U.S. Attorney General Eric Holder told the Senate Judiciary Committee the banks were too big to jail.

Wall Street banks who caused the financial crisis five years ago were quickly bailed out because officials decided their collapse would pose a “systemic risk” to the U.S. economy.  Yet in the five years since the bailout very little has been done to address the systemic crisis of foreclosures and underwater mortgages (read our new report, Wasted Wealth here), and the impact on families and communities across America. Meanwhile, the banks have only gotten bigger and financial power more concentrated.

Homeowners affiliated with Alliance for a Just Society and the Home Defenders League joined with Occupy our Homes to bring homeowners directly impacted by the crisis to DC. Their goal: to tell the Department of Justice that in the United States there is no bank and no bank CEO who should be considered above the law. Seventeen homeowners were arrested.

Betsy Andrews from Seattle said, “I came to DC because I’ve been under the threat of foreclosure for five years.  The toll it takes on you, not only mentally but also physically, is horrible and there are millions of people just like me, in similar situations.  I don’t know what else we have to do to get the government to take notice of this crisis.”

Homeowners who were arrested yesterday refused to give their names to post bail.  Instead they gave IDs saying they were Jamie Dimon, Lloyd Blankfein, Richard Davis, Michael Corbat, Brian Moynihan, or John Stumpf – the CEOs of the “too big to fail” banks – to drive home the point that the Department of Justice should be prosecuting the bank CEOs responsible for the Wall Street crisis instead of arresting wronged homeowners.

In recent months, checks from settlements with banks were finally sent to homeowners who had been illegally or improperly foreclosed on. But the checks were in the range of only $1,000-$5,000 – practically a slap in the face.  To add insult to injury, some of these settlement checks bounced.

There is a growing bi-partisan chorus calling for the end of the “too big to fail” banking era, including high profile experts and officials like former International Monetary Fund Chief Economist Simon Johnson, Federal Reserve Governor Daniel Tarullo, former Federal Reserve Governor Thomas Hoenig, and even Federal Reserve Chairman Ben Bernanke.  Sen. David Vitter (R-LA) and Sen. Sherrod Brown (D-OH) recently introduced a bill in the U.S. Senate to end the “too big to fail” era. The bill is expected to see consideration in the Senate this summer.

For the rest of this week, homeowners will continue to put pressure on the Department of Justice and Eric Holder to recognize that no bank is too big to jail. 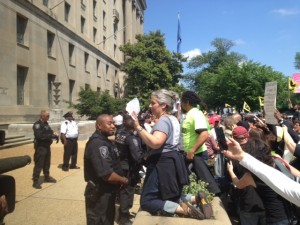 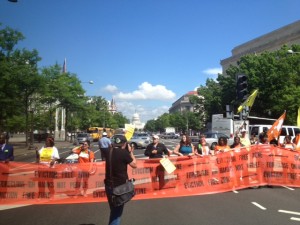 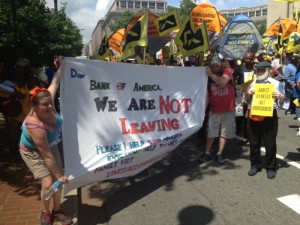 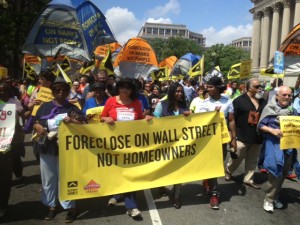 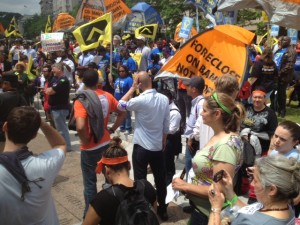