More than 37 million Americans are saddled with student loans — nearly one in five households. We glorified higher education for an entire generation, enabled an unsustainable system, and then blamed graduates for their choices. 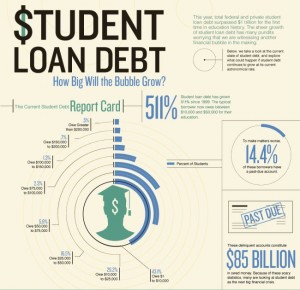 While some sectors of the economy have begun to see a recovery, student loan borrowers are watching their hopes of attaining the American Dream fade away.

Student loan debt, the only debt that rose during the recession, has grown nearly 300 percent in the past eight years. Totaling over $1.1 trillion, it among the largest forms of household indebtedness, recently surpassing credit card debt.

In 2011, the average four-year graduate owed $26,600 in college loans. And on July 1, Congressional inaction allowed the interest rates on subsidized Stafford loans to double from 3.4 percent to 6.8 percent, adding an average of $2,600 to students’ already exorbitant costs.

With little fanfare, the deadline came and went. Perhaps this is because student debt may appear to be a problem supposedly confined to those who choose loans over work, attend fancy colleges they can’t afford, and forget to read the fine print.

The cost of a college degree in the U.S. has increased 1,120 percent in the past 30 years, a rate almost twice as fast as health care costs and nearly five times as fast as food prices. In 1981, a student earning $3 an hour could pay for their entire tuition by working full-time for a few weeks during the summer. Now, a student making the federal minimum wage would have to work more than 155 hours a week during his or her summer to afford the average tuition at a four-year public university. This, of course, assumes that the student can find a job in a country boasting a 16.2 percent unemployment rate for Americans 16 to 24 years old. But, hey kids, I’m sure you can just work to pay your way through college like your parents did.

Why are we as a society willing to forgive big banks but refuse to extend the same lenience to a 17-year-old investing in his or her education? Just to get an education, students are charged high interest rates and are not allowed to refinance their loans. To top it off, they are denied basic consumer protections like bankruptcy rights and statutes of limitations on collections of student debt. And it’s not like students can sell back their education to make up for their losses.

So, why did we push so hard for these students to incur such a burden? Because higher education is an asset to the individual. But we must remember that an educated society is a stronger society. Yes, those with a college degree have increased earning potential, and a reduced likelihood of unemployment, making them less likely to depend upon government assistance programs. However, universities attract world-renowned researchers and innovators, further boosting economic growth, and we all benefit from the fruits of that innovation. Public education is an investment we claim we believe in, and it’s time we begin acting like it.

If we don’t, not only will these students see the devastating consequences of our choice to ignore them, but the economy will as well. Millions are so bogged down by debt that they are barely making ends meet; they are struggling to pay for rent or food, forced to move back in with their parents, or have become delinquent in their loan payments. We are creating a population that will stop spending.

It is clear that many factors are to blame for this crisis, and it is equally clear that there is no easy solution. But there are some on the table.

The Oregon Legislature, for example, has proposed a “Pay It Forward” program in which there are no upfront tuition fees, but, instead, students pay a small percentage of their income for 20-25 years after graduation. This innovative model, developed by the Economic Opportunity Institute, offers a viable solution to the debt crisis.

In any case, it is time that the student loan debt crisis is addressed, and that a comprehensive policy strategy is put in place. We need to invest in higher education and stop punishing those who tried to survive in a system set up against them.