Pressure is intensifying on the House of Representatives to pass a comprehensive immigration bill this October that includes a clear pathway to citizenship for 11 million undocumented immigrants. The action, led by We Belong Together, brought hundreds of people from across the country to increase pressure on the House and re energize the movement for a national day of action on October 5th. 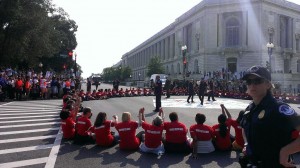 Throughout the country, tens of thousands of Americans and Aspiring Americans will take their voices to the streets, to their representatives and to their neighbors calling for comprehensive, compassionate immigration reform.

Over 100 women were arrested last Thursday in Washington D.C. in direct action welcoming the House of Representatives back from recess with one clear message: Keep immigrant families together by fixing our nation’s broken immigration system. Of the 115 women reportedly arrested for blocking Independence Ave., 40 or so are undocumented women fighting to keep their families together and for a clear pathway to becoming citizens. To join these mothers, sisters and daughters in standing up for the safety and security of  immigrant families follow this link and connect with an community organization in your city.

Women, many of whom are mothers, risked arrest to send a message to Congress, especially the House of Representatives, that dragging their feet on immigration reform was not to be tolerated. “The action reinvigorated the movement for comprehensive immigration reform—putting families, and especially women at the forefront on the issue,” said LeeAnn Hall, Executive Director of the Alliance for a Just Society. 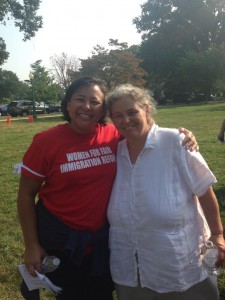 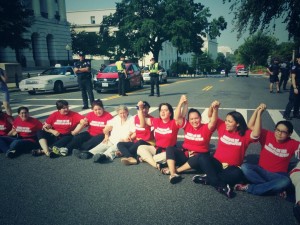 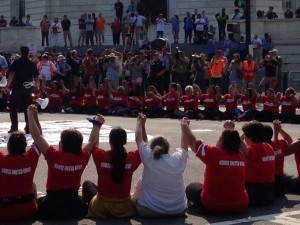 LeeAnn Hall was one of the women arrested during the direct action. “The energy was amazing, being there with so many undocumented sisters, showing such bravery in risking arrest. Their dedication and perseverance is an inspiration.” Other grassroots leaders and Alliance affiliate leadership from Colorado, Nevada, New York, and Washington State joined in the event; some also risking arrest.

House leadership did come forward the same day with a series of statements  hintingh at putting immigration reform on the House floor between October and the end of November. What is critical to the women who staged the action, and the thousands of other reform advocates and activists nationwide, is that the House needs to do more than piecemeal its way through the issue. The national demand is for a comprehensive bill, one that clearly defines a pathway for citizenship for nearly 11 million undocumented immigrants: mothers, fathers and children trying to build a future for themselves and their families.

Stand with these mothers, sisters and daughters for the safety and security of  immigrant families! Keep Our Families Together!

Follow this link and connect with an community organization in your city.