Part 4 in Our Series on Wages and Work.

A common concern in the movement for fair wages is that employers who want to pay better are convinced they cannot afford to. But a look at the big picture reveals living wages are actually good for business. It adds to their competitiveness, workers who are paid well spend more. Spending more means more business.  In essence, better wages enable workers to better provide for their families, while strengthening our economy and leveling the playing field for small businesses that find themselves competing against large corporations. 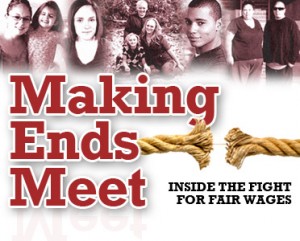 While the federal minimum wage has remained stagnant over the past four years, the purchasing power of that wage has decreased because of inflation. That means workers making the minimum wage four years ago saw their $7.25 go further than minimum wage workers today. These workers basically received a pay cut for four straight years.

How does this play out? Do the math. Earning just $15,000 a year is less than the federal poverty line for a single parent with one child, let alone for a worker providing for more than one other person. People working minimum-wage jobs have to make tough choices on what bills to pay (like whether to forego food to pay the rent), and often still have to rely on government support to get by.

Increasing the minimum wage would do more than just help low-wage workers inch past the poverty line; increased wages generate spending, increasing demand and generating new full-time jobs. When low-income workers see their wages increase, they use that extra money to purchase things like food, clothing, and other personal items — spending that goes back into the economy. In fact, the Economic Policy Institute estimates that increasing the minimum wage to $10.10 per hour would increase GDP by more than $32.6 billion and create more than 140,000 jobs.

These entrepreneurs recognize that their employees are people (and potential customers). However, they must compete with big businesses that see employees only as a line item on the company ledger. As one restaurant owner in New Jersey put it in an op-ed in the Newark Star-Ledger a few months ago, “Unlike those in the big-business food service industry, I pay all my workers much more than the state’s mandated minimum wage of $7.25 an hour. They are real, hardworking people, after all — don’t they deserve real wages?”

Unlike small businesses, large corporations that depend on the government and taxpayers to subsidize their low wages risk losing that de facto subsidy and the ability to undercut businesses that pay higher wages. With profit margins at an all-time high, though, large corporations can afford to increase their workers’ pay and stop relying on taxpayers to subsidize their low wages.

Increasing the minimum wage will help workers, it will help the economy, and it will help level the playing field for small businesses. It’s a win-win-win solution.