The fight for fair and humane immigration reform is about respecting the dignity and humanity of all immigrants across the U.S. It is a fight for family unity. But this fight is also about the evolving definition of citizenship. 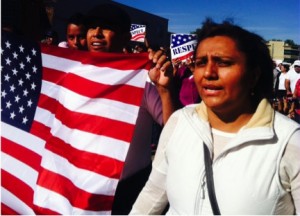 Citizenship is a guarantee against deportation; a protection against fear and reprisals. Any immigrant, regardless of status, can be deported – whether they are undocumented, a permanent resident with children who are U.S. citizens, or married to a U.S. citizen. Even a minor mistake on your application for citizenship can jeopardize your status in the country and launch you into deportation proceedings.

Providing a meaningful pathway to citizenship means guaranteeing a predictable route – and a future – for those who want to become citizens. To have citizenship in the U.S. means that you get to be a full human – with full rights. Being a citizen means that you can vote.

So let’s be blunt, voting is the real problem.

Democrats and Republicans have their political interests as to why they want to support or oppose immigration reform. Republicans are concerned that if immigration reform passes in 2014, immigrants and especially the Latino community, will always vote with the Democrats – and this is why they don’t want to expand citizenship to undocumented people.

It is immoral and unethical to deny anyone citizenship because political factions are afraid of the historical ramifications that this could have on the future political landscape. The question of citizenship shouldn’t be one about divide and conquer, but rather one that helps us build a strong future together.

Immigrants work, pay taxes, build businesses, buy homes, and support communities; they should be part of the shaping of the future and the identity of our country. And shaping our future means voting. We need to have a system that brings the best out in people.

A deportation-only machine does not bring out the best in people who want to build and grow our country together. When immigration reform happens, it must leave no doubt about the value of all people. There can be no second-class citizens. That means stopping the deportations. It means expanding citizenship to our families and friends. And most importantly, it means recognizing that immigrants are helping build a brighter future for all of us.

Citizenship is about recognizing the full humanity and the full value of immigrants and all people. We need to transcend politics and focus on what’s at stake: the future of our country.

Fernando Mejia is an organizer for the Alliance for a Just Society.