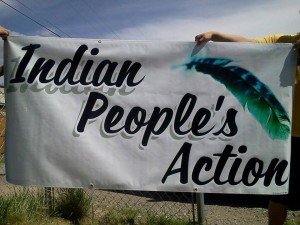 None of us can afford to take the right to vote for granted – as Native Americans living on reservations in Montana can confirm. On the Fort Belknap, Northern Cheyenne, and Crow reservations, Native Americans who want to vote, or even register to vote, have to travel as much as 180 miles over rough, rural roads to reach county election offices.

The distance and the expense are serious barriers to accessing the ballot box.

Mark Wandering Medicine, a Northern Cheyenne, has filed a lawsuit in Montana calling for satellite voting offices on reservations, a step that will remove the hardship and the barriers that Native Americans face trying vote.

The Northern Cheyenne Tribe reservation in southeastern Montana is one of the most isolated. Traveling to Forsyth, the county seat, means having a vehicle, affording gas, then hours on rugged roads.

“We have a tough time of it really, most people just don’t have the means of going all the way over there,” he said. “It is a real hardship to go, and once we arrive there, we are not treated well. We run into a lot of discrimination.

“There are just a few people on the reservation who have the means to go to Forsyth. We are concerned about the majority of people who can’t make it there. They can’t vote,” he said. “Given all those factors, we decided to file a lawsuit in federal district court to establish a voting office on the reservation.”

Bringing every voice to the ballot box is critical to our democracy. Progressive leaders, whether they are elected, working or volunteering in their communities, are obligated to fight to ensure that everyone has the opportunity to cast their vote.

“Indigenous people have been oppressed for so long, but we continue to move forward,” said Michaelynn Hawk, Crow director of Indian People’s Action. “We will win equality. Voting will help us build a stronger future for ourselves and for future generations.”

Strengthening the Native voice at the polls is critical to every progressive voter. It is especially important as we work to overcome gridlock and build toward progressive victories – like expanding Medicaid, creating more jobs, and improving the social and economic conditions on reservations.

The latest violation of Native voting rights is part of a long history of denial. It dates back to the original U.S. Constitution that specifically exempted Native Americans from citizenship.

In 1868, the Fourteenth Amendment, granted citizenship to people born in the United Sates – birthright citizenship – again, Indians are specifically exempted.

Then, in 1924, the Indian Citizenship Act granted citizenship to all Indians – only in theory. Individual states continued to use all kinds of justifications for keeping Native Americans from voting. Colorado, Maine, Mississippi, Montana, Nebraska, Utah, Washington and Wyoming all found means to blocking or diluting the Indian vote.

Finally, in 1965, the Voting Rights Act included American Indians in its mandate. But it wasn’t until 1975, that Natives in Montana were allowed to serve as voter registrars. Throughout the 1980s and 1990s, federal courts continued to find that the voting system was unfairly rigged against Natives in Montana. Only now are Natives are finally starting to be elected to county commissions.

About 50,000 Native Americans are eligible to vote in Montana – the vast majority tends to register as democrats. Gov. Steve Bullock, a democrat, won his position by less than one percent in 2012. Sen. Jon Tester, also a democrat, won his seat with a thin margin.

Likewise, Secretary of State Linda McCulloch, the defendant named in the voting rights lawsuit, is a democrat.

Since then, Native advocacy groups have come forward, offering to pay for the technology on the three reservations. There has been plenty of time.

But still no progress has been made – and elected leaders continue to raise new roadblocks.

It’s frustrating to Wandering Medicine, who lived most of his life on the reservation, except while in the military. He is a veteran of the Vietnam War, serving from 1967-1972 like many other young Native American men, fighting for his country. He has earned a voice – and a vote – in his country.

The time is now for progressives to stand with Montana Natives to fight for full access to the vote. It is time to break from our history of discrimination and instead, act on our principles. The legitimacy of our democracy requires that all people be able to vote and to participate.

Please join Alliance for a Just Society in signing this petition to support Native American voting rights in Montana.

Kathy Mulady is the communications director for the Alliance for a Just Society. You can contact her at kathy@allianceforajustsociety.org