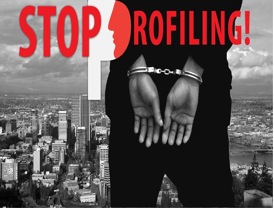 Lisa Haynes was waiting for a bus near her home in Portland, Ore., when two police officers passing in a patrol car stopped and began questioning her. Uncertain of what was happening, or why she was being questioned, she turned to walk away. Within moments, Haynes, 4’10”, was forcefully grabbed, pushed to the ground and was handcuffed. One of the officers had his knee in her back as he cursed at her. She was arrested and shoved inside the patrol car.

Police later said they had mistaken the petite, 40-something African American woman, for a 5’6” male, Hispanic suspect they had been pursuing.  They released the handcuffs and told her to go home.

Haynes filed a complaint. She met with police review boards. She stood up for her rights.  An internal police review found that the officers were courteous during the encounter, and had understandably confused her for the suspect – after all, she and the suspect were both wearing black jackets. When Haynes reached for her backpack, officers said they feared for their safety.

The internal police review reached its conclusion and closed its investigation. Haynes’ complaint of misconduct would get no further consideration. 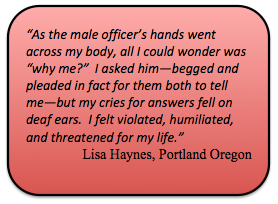 Haynes is still seeking justice. She has filed a lawsuit against the Portland Police Department. Her experience, while shocking, unfortunately, isn’t unusual – not in Portland, Seattle, Denver, or many other cities around the country.

Victims of police misconduct are skeptical of the complaint process, and with good reason: according to a 2012 annual report completed by Portland Independent Police Review Division, 77 percent of the complaints made were dismissed and without ever receiving an internal affairs review.

Many who have had their rights violated, have taken the brave step of reporting the incident to a higher authority, hoping for justice. Unfortunately, the vast majority of those complainants are left feeling even worse after their requests for an investigation are again ignored, reinforcing the entire community’s perception that they have no opportunity or expectation of relief or justice.

The reasons for the dismissal vary. According to the report, dismissals occur when the complaint itself is untimely, or when the officer in question is unable to be identified.  Sometimes, witnesses can’t be located, and at times, evidence has been lost. The pain and humiliation suffered by the victim is not eased and there is no closure.

Throughout the country, community organizations are taking bold action to assist the victims of police misconduct by gathering evidence to use in the complaint. The NAACP has implemented an online Rapid Report System allowing the victims of racial profiling and police brutality to download their complaint into a national database to capture departmental trends. Cop Watch has instituted a national database allowing the public to post captured pictures or videos of police misconduct.

Police departments promise reforms, but little change occurs even after decades of effort and evidence collected by citizens.

In Seattle, a federal department of justice investigation of the police department found use of excessive force by officers. The Seattle Police Department remains under close scrutiny by the justice department and required to comply with numerous improvement measures or face sanctions. The justice department action only came after more than 40 years of complaints by citizens – in particular African Americans.

In Denver, the Colorado Progressive Coalition is a leader on racial justice issues. Last year, the coalition released the “Truth in Justice” report detailing experiences community members have had with police violence. The coalition also maintains a statewide Racial Justice Hotline. The coalition has sponsored rallies and community meetings calling for firing problem police officers. The coalition also organized the community groundswell that led to the changes in the city charter, making it easier for dangerous officers to be removed from the force.

In Portland, Ore., the Center for Intercultural Organizing is joining the effort to increase assistance to those willing to speak out against unlawful police misconduct with its Stop Profiling project – together with the Oregon Justice Resource Center. Victims will have the valuable assistance of specially trained law students to capture the details needed to demand an investigation into the alleged violation.

Anyone in Portland who feels they have been profiled or mistreated by police officers is invited to make an appointment to share their story on Friday, March 21. Documenting the reality faced by the community is a first step to creating change. More information is available at info@ojrc.org.

The purpose of the event is to help CIO stay abreast of what’s taking place in the community between citizens and law enforcement. CIO has been the eyes and ears of racial profiling trends in the Greater Portland area since 2006.  It’s also a way of making sure the police investigation system itself is strengthened and held accountable, by collecting the information needed to go forward with investigations.

Speaking out against police brutality requires courage, action, and working together. Communities across the nation are banding together to bring assistance in increasing public safety and standing up for justice to those harmed.

Dr. Sheley Secrest is a policy analyst with the Alliance for a Just Society.