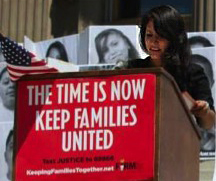 Delaying defense is one of the oldest tactics of war. It’s as much a psychological one as it is strategic. The goal is to wear down the opposition until they become weak, hungry or distracted. Our immigrant rights movement hasn’t been immune to it.

Now there is no longer time for delay: two million deportations is a clear message and a rallying cry that we cannot and will not be ignored.

The immigrant reform movement built great power during the electoral battle of 2012, vast armies of strong, fearless leaders were created as we went door-to-door registering people to vote.

“When a community of immigrants works a 10-hour day, then takes the time to go out and register people to vote – you get a good idea how strong we are,” said Krista Bustamante, organizing director at Idaho Community Action Network.

We won the election and immigration reform was at the forefront of the 2013 political agenda. We built strategic coalitions, launched a bus tour, and organized massive May 1 rallies and marches. We collected thousands of petitions, did civil disobedience actions nationwide – and we passed legislation in the Senate.

The Republican strategy was something else. Do nothing. Don’t talk about immigration. Don’t hold anti-immigrant rallies – to do so would mobilize thousands of people that would send the Republicans into a spiral.

And now it’s 2014 and our opponents are nowhere to be seen. Early in the year, Republicans cracked open the door and slipped us a page of “immigration principles” then slammed the door with a firm “it won’t happen this year.”

Delay is a great tactic to exhaust the opposition and to allow the factions of your own political entity to build agreement.  We have waited, but we are not willing to wait any longer.  Two million people have been deported. Every day, more than a thousand people are deported. Countless families have been torn apart.

Delay is a strategy that won’t work against reform advocates, against the Dreamers or against thousands of American children who cried as their parents were deported. We are determined and focused. The rallying cry for immigration reform has not weakened or waned – it has grown stronger.