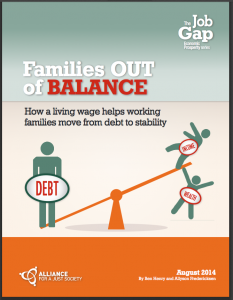 Read the Families Out of Balance report here.

Low-income families are already struggling to meet basic needs. Factor in suffocating household debt, and it is clear that families not making a living wage have little chance of building for the future.

As the gap between minimum wages and living wages continues to grow, we find that low-income households face a disproportionate debt burden — to an alarming degree. Families are forced to navigate a system that sets them up to fail, resulting in painful kitchen table conversations as households confront impossible balance sheets.

Job Gap: Families Out of Balance, produced by the Alliance for a Just Society, is the first report in the Alliance’s 2014 Job Gap Economic Prosperity Series. This study examines just what it takes to move beyond living paycheck-to-paycheck and the challenges that low-income families burdened with debt face.

The report also includes living wage findings for five household types in 10 states and in New York City. The Alliance has produced a Job Gap Study on jobs and wages since 1999.

Alliance research figured prominently in the successful $15 minimum wage fight in Seattle last spring. Jill Reese, associate director at the Alliance for a Just Society and a leader on income inequality issues, participated in panels and met with the Mayor’s Income Inequality Advisory Committee.

“These findings paint a clear picture of the disproportionate debt burden shouldered by families making less than a living wage,” Reese said. “These are indicators of larger systemic inequities, and inaction by policymakers around the country is, quite frankly, unacceptable.

“Legislators in states and in Congress must step up now and make investments that help families gain a foothold,” she said.

Key national findings in the 2014 report include:

The report calls on policymakers to:

Job Gap: Families Out of Balance  includes personal stories from working families throughout the country struggling to make ends meet. We are happy to help you contact families willing to share their experiences. Some of the stories include:

The study’s authors, Ben Henry and Allyson Fredericksen, are available to discuss the report findings.  The complete report can be found at www.thejobgap.org

The Alliance for a Just Society is a national research, policy and organizing network that focuses on health, racial and economic justice issues. The Alliance is based in Seattle.