On Wednesday, January 26th, Washington CAN! members gathered outside the CHASE building in Seattle to take action against one of corporations who, by successfully lobbying for tax exemptions, is responsible for the current state budget deficit and state fiscal crisis. This is the start of a series of direct actions planned against greedy banks and corporations. 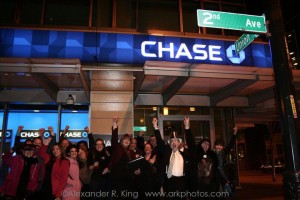 The members entered the CHASE building, then began walking through the halls, working their way right into the middle of the middle of CHASE’s networking event dubbed “Schmooze Fest.” As they walked in, they chanted “We’ve got to beat back the bank attack!” The bankers were perplexed; they didn’t know what was going on. Finally, they got a taste of people’s anger and frustration over the financial crisis the big banks created.

Once Washington CAN! members finished the first round of chants, several members began sharing stories of the hardship brought upon them by unscrupulous bank practices through a megaphone. One of the “Schmooze Fest” attendees became so angry that he disrupted the speakers and used physical force to try to remove a protester. The members were kicked out of the building quickly. They were escorted from the “Schmooze Fest” site to the elevators by the head of security who seemed stern and angry with the members. Once she was inside the elevator, though, she began laughing, demonstrating the widespread disdain held by working people for CHASE and other big banks.