A recent study released by the Pew Research Center brought to light the fact that Hispanics have been the hardest hit during this economic recession. According to this study, the decline in the housing market in 2006 and the economic recession from 2007 to 2009 were enormously felt in communities of color. For instance, the Asian median household fell 54 percent, the African American community saw a drop of wealth of 54 percent, and Hispanics experienced a drop of 66 percent – this in comparison with their white counterparts who experienced a loss of 16 percent.

Before the housing crash in 2006, people bought houses and opened businesses with the belief that the accumulation of wealth would continue. But since the recession hit, people have lost their jobs, many small businesses have closed down, and thousands of houses throughout the U.S. have been foreclosed. Further, the report states that in 2005 almost two thirds of Hispanics median net worth came from housing values, and when the housing market plummeted so did their wealth. 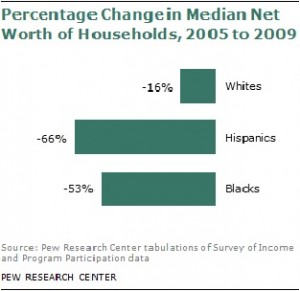 The New York Times points out that “a third of Hispanics had zero or negative net worth in 2009, up from 23 percent in 2005,” while “for blacks, the portion rose to 35 percent from 29 percent, and for whites, it rose to 15 percent from 11 percent.” Even though the recession has taken a toll on the wealth of whites, in comparison they have been less affected. And, when looking to the wealth disparities in the overall population, the report suggest that the top 10 percent of the economic strata in the U.S. was less impacted in comparison to the remaining 90 percent. 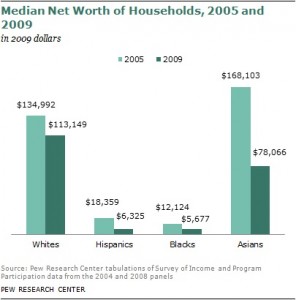 This research increases the urgency for Congress to stand strong against cuts to critical safety net programs. Communities of color, including Hispanics, are suffering the most in the current economic climate, and it is not fair that big banks and corporations have not paid their fair share.