Kicking off a month of New Bottom Line actions sweeping across the country, yesterday Washington CAN and the Alliance for a Just Society helped spearhead statewide protests against Wall Street banks’ raiding of our economy and our political system.

The Association of Washington Business – the state’s corporate lobby – was holding a policy summit at Suncadia, a swank golf resort on the eastern slopes of the Cascades. JPMorgan Chase regional exec Phyllis Campbell was there to lead a seminar called, “Where Will the Money Come From?” 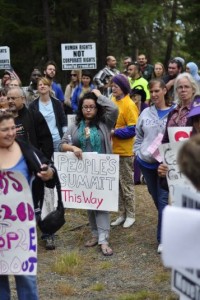 In the wee hours of the morning, Washington CAN gave “wake-up calls” to slumbering CEOs and flyered their rooms with “agendas” for the day’s activities. Later in the day, two hundred protesters descended onto Suncadia from all corners of the state. They staged a picket at the resort’s entrance, while a fifty-person team dodged security to deliver the “Save Our State” message outside the lodge where the corporate CEOs were hammering out the corporate agenda.

The protest put Chase exec Campbell on the defensive and forced her to speak publicly about the tax breaks her bank pulls in from the state.

While the Showdown at Suncadia was raging, more protests took place in Seattle, Spokane, Vancouver, and Olympia. In Seattle, community members declared Chase’s downtown headquarters a crime scene, took over the intersection of 3rd & University, and put the CEOs of Chase, Wells Fargo, and Bank of America on trial for crimes against our community.

Some of these crimes include fraudulently foreclosing on people’s homes, hoarding money instead of paying their fair share of taxes, and taking from the poor by charging 85 cents per transaction for use of electronic benefit transfer cards. 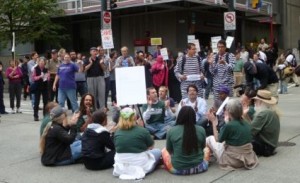 Eleven people put their freedom on the line and were arrested while standing up against big bank greed. These were just the first of many that will be sweeping across the country in coming weeks. To get involved, click here.