Last week, Sarah Bloom Raskin, Board of Governor of the Federal Reserve System, shared increasing concern over the nations’ wealth gap.  Reports by the Huffington post relay, “In my view, the large and increasing amount of inequality in income and wealth, which has been an ongoing development for decades, may have exacerbated the crisis.”

Raskin’s stark observations confirms what many policymakers have noted as the wealth divide in the post-Recession increase between the haves and have-nots. 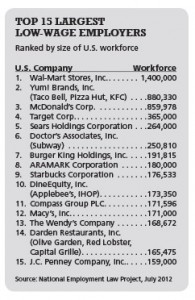 According to the Broken Bootstraps, the 2012 Job Gap report released in February by the Alliance, income inequality has increased more in the U.S. than in any other major western country since 1960. The Walton family, for example, has as much wealth as the bottom 48.8 million families combined, or 41% of the U.S. population. An Economic Policy Institute brief states, “A key driver of wage inequality is the growth of chief executive officer earnings and compensation.” In 2011, the CEO-to-worker compensation ratio was 200-to-1 — much higher than the prevailing rate for any decade in the past 50 years.

Raskin’s speech to Washington officials pointed out that while average wages have increased for people who have remained employed through the recession and recovery, the average wage for new hires has actually declined since 2010.

A living wage is a one that allows families to meet their basic needs, without public assistance, and that provides them some ability to deal with emergencies and plan ahead.

Raskin raises her repeated contention that the economic recovery has created too many low-wage jobs and that people who’ve been laid off have been unable to find jobs as good as the ones they lost.

As we see in the Broken Bootstraps report, workers across the country are finding that hard work doesn’t guarantee that they will have enough income to support themselves and their families — that pulling themselves up by their bootstraps is, in fact, a myth.

There are several strategies to help ensure that working families have the support they need: Increase the wage floor, strengthen federal and state safety nets, and increase revenue at both the state and federal levels to strengthen the infrastructure that will allow for a strong safety net for workers. Additionally, states should ensure that workers are receiving the wages that they have earned, and that regulations are in place to protect low-wage workers.

In the absence of living wage jobs, strong federal and state safety nets can help workers provide for their families. Federal programs like TANF should be able to expand to increased need and not have funding capped. Additionally, funding for safety net programs such as Medicare should be strengthened, not cut.

At the state level, supports like state-level Earned Income Tax Credits, childcare assistance and tax credits, and state health care programs should be strengthened, not cut. States should make state-federal partnerships, such as TANF, more robust, and should accept federal funding for expanding Medicaid.

A strong safety net requires enough revenue to support it. At the federal level, allowing taxes on high-income earners to increase to previously held levels will help inject revenue into the economy that can then support low-wage workers. A financial transaction tax can also help level the playing field by taxing certain large financial transactions and using that revenue to strengthen work supports. As for the workers caught in the job gap: “They are sanitation workers, office receptionists, and nursing assistants; they are single mothers of three who worry: How will I be able to send my children to college? What if my landlord raises the rent this year?” Raskin said. “Tens of millions of Americans are the people who ask themselves these questions every day.”