[/tippy] based in Orlando, joined with other immigration coalition members in a series of four public events to raise community voices in support of immigration reform.

It was a fast-paced week that included a rapid response action at Rep. John Mica’s residence on Tuesday, a 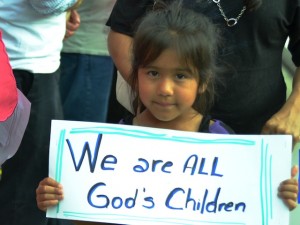 “While each event carried a special message,” recounts Community Business Association Director Brook Hines, “ the visit with the nuns brought the whole week into focus. We began the meeting with the staff visibly overwhelmed. But by the time we left, Webster was chatting up the delegation, requesting more information, more stories, and more visits.” 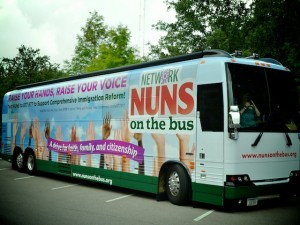 “We may not have secured his vote on this one visit, but everyone left with the sense that we’d accomplished something.”

[/tippy], and [tippy title=”Florida New Majority“]Florida New Majority [FNM] was formed in 2009 to find common ground among diverse communities in the state and then help those communities exercise their collective power. Through street-level organizing, training and education, and the mobilization of communities FNM is overcoming the dark days of racism and divisiveness in the Sunshine State to bring the new light of fairness and equity to all residents by working together, taking ownership of our government, and becoming the change we want to see.[/tippy] (among many others), the Community Business Association helped deliver the message to Central Florida Republican lawmakers that their community strongly supports common sense immigration reform with a path to citizenship. 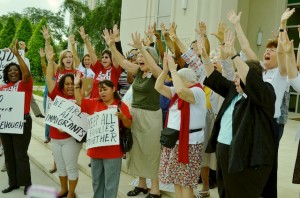 Hines reflected back on the events of the week, “As one of the nuns put it, this event was about “opening hearts,” and the delegation left feeling we had accomplished that mission. I personally left with the sense that to be an effective organizer, “opening hearts” is part and parcel of the job, and not just when accompanied by nuns… though that admittedly makes the job easier!”