Marco Saavedra sacrificed his own freedom to demand the immediate release of the low-priority detainees found in detention centers across the country whom could be spared from deportation simply by applying prosecutorial discretion.  He is right.  Not only will releasing non-criminal to low-level offenders reunite families, it will save the United States 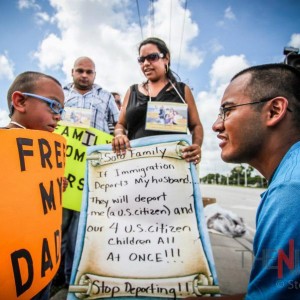 a ton of money.

In July 2012, Mr. Saavedra took bold and heroic actions as he and his team of freedom fighters was intentionally detained to shed light on the shortcomings of the newly implemented

“There were about 600 detainees with me.  A lot of them were caught with either little to no criminal record.  They were doing just basic things like driving without a license or as passengers at a checkpoint, or maybe fishing without a license.  Some were at work, or at a corner at Home Depot. Some were going to church.”

Detention centers across the United States have become profit-making warehouses affecting not only the families and the individuals detained, but also the pockets of the American taxpayer.

From 1996 to 2006, 65 percent of immigrants who were detained and deported were detained after being arrested for non-violent crimes.  Between 2009 and 2011, over half of all immigrant detainees had no criminal records.  Of those with any criminal history, nearly 20 percent were merely for traffic offense.

The White House continues to request billions of dollars for the detention operations of Immigration and Customs Enforcement (ICE). Specifically, for the Fiscal Year that begins October 1, 2013, (Fiscal Year 2014), the Department of Homeland Security (DHS) and the White House requested $1.84 billion for DHS Custody Operations.

Sadly, many of these detention dollars flow to enormous private prison corporations that stand to reap significant profits when the number of detained immigrants increases. The public’s financial loss is the private detention center’s billion-dollar gain.  Corrections Corporation of America is the largest ICE detention contractor, operating a total of fifteen ICE-contracted facilities with a total of 5,800 beds.  Last year’s reported gain was 1.8 billion.  Private prison companies in 2011 housed nearly half of all immigration detainees.

Rather than effectively implement prosecutorial discretion under the Dream Act, and to seek common sense solutions of detaining low-level offenders the American people are footing the bill for a private industry whose profit margins depends upon criminalizing and exacting harsher punishments on entire populations including immigrants and other people of color.

Marco explains, “I am a Dream Act-eligible student.  We’ve found that there are many detainees who qualify for low priority deportation.”

Under the Dream Act, enrolled students under age of thirty are eligible for a two-year reprieve from deportation if they can show they came to the states before age sixteen, lived in the country consistently for the past five years, have no criminal records, and presents no threat to national security. The Act could stop the deportation of as many as 1.3 million undocumented immigrants.

Marco, remained in Florida’s Broward Transitional Center for 23 days before being released under the Act.  He was one of the lucky ones—there are still thousands that were left behind.

According to an August 2012 report released by the National Immigration Forum, the average cost of immigration detention per person is up to $159 daily.  Looking nationwide at a 31,800 capacity for detention beds, that number quickly adds up to a total of $5.05 million per day—a significant waste of financial resources this country cannot afford to make.

The Alliance for a Just Society will address this costly waste of resources and the impact on people’s lives at its upcoming symposium on October 17 – 20, 2013 at “Cell Blocks and Border Stops” in New York City, NY.  A featured guest speaker at the symposium, Marco Saavedra a student youth-activist of the nationally renowned DREAM 9, will give attendees an inside, personal glimpse of US detention center and the problems found with deportation.

Join the discussion and register for Cell Blocks and Border Stops here!