In the past four decades, mass incarceration and immigration control in the United States has skyrocketed. Today, the U.S. incarcerates more of its population than any other country in the world – at rates unmatched in modern history. 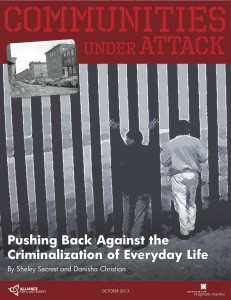 More than seven million people are under control of the criminal justice system. The U.S. has less than five percent of the world’s population, but we have almost a quarter of the world’s prisoners. China, which has four times more people than the United States, is a distant second in incarceration numbers, with 1.6 million people in prison.

With the increase in private prisons – driven by making profits for their investors – we are seeing an increase in the criminalization of everyday life.

Communities Under Attack: Pushing Back Against the Criminalization of Everyday Life.