Fast food workers are taking to the picket line throughout the country. SEIU and other unions are helping these efforts, but many strikes are happening in places without any union presence. Low-wage work is simply not enough for families and individuals to thrive, to plan for their future, and most times, simply not enough to live. 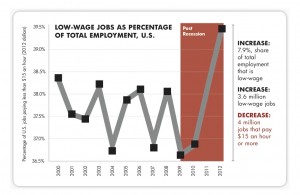 Underemployment, ‘overemployment’ (working more than1 job) and the threats to public benefits in D.C. and in many states is adding more weight atop many populations tracked into low-wage employment. The trend is troubling.

“America’s Changing Economy: Searching for Work that Pays in the New Low-Wage Job Market, is the 15th installment of the Alliance’s Job Gap Report.  It has grown from a Northwest regional perspective and this year marks our first national report. True to the Alliance’s mission and focus, we released the report in 9 affiliated states and in NYC. You can find ways to get involved, graphics to share and all the reports at:

“Income inequality at a record high. A Great Recession that, for most, continues today. And, as our 15th annual Job Gap study finds, a fundamental shift in our economy toward a greater share of low- wage, non-sustaining jobs.

This economic recovery has been tough on the American worker. By official measures, the recession that began in December 2007 ended in June 2009, and the U.S. economy has been growing since then. However, a variety of indicators show a trend of growing inequality in which, for a broad swath of workers and families across America, the tough economic times continue.

While the reported unemployment rate has been decreasing, driving that change is a shrinking labor force. In fact, the percentage of Americans in the labor force — defined as those employed or actively seeking employment — has reached a 35-year low.

The impacts of the Great Recession are so profound that America’s economy must now be analyzed as pre- and post-recession. Today, we discover — through our own data analyses and research by others — evidence of a new standard of living for the American worker, with low-wage, non-sustaining jobs replacing jobs that pay better wages.”

Released yesterday, the 2013 Job Gap Report launched the Alliance annual study into the national arena.  Ben Henry report co-author and Alliance Senior Policy Associate was joined on a call with reporters by Doug Hall of the Economic Policy Institute, Dedrick Muhammad of NAACP and David Rolf of SEIU. Here are some of the findings they discussed:

Racial Impact of the Low-Wage Economy

“America’s low-wage workers are disproportionately people of color.” Black workers and Latino workers are are more likely to hold low-wage jobs. Much more so than their White counterparts. What is important to note is that the restaurant industry employs more people of color than any other industry. With the increase in low-wage employment opportunities, these populations will overwhelmingly be affected by the reduced number of higher paying jobs in the economy.

A 2013 study by the Restaurant Opportunities Centers United finds that:

Some of the press coverage from yesterday is below: