Yesterday, the Congressional Budget Office released a report on the estimated effects of increasing the minimum wage to $10.10 and indexing it to inflation by 2016. Opponents of the increase have jumped on the report’s (questionable) conclusion that it would cost jobs, while many in favor of increasing the minimum wage have focused on the benefits, including lifting almost one million workers out of poverty. 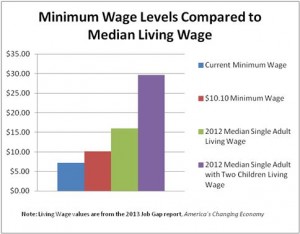 However, even a minimum wage of $10.10 doesn’t come close to reaching a living wage that allows workers to move beyond living paycheck to paycheck. Our 15th annual Job Gap study, America’s Changing Economy, clearly shows that $15 – $16 per hour is the minimum pay needed to support a single adult working full time.

So, here are seven reasons not to let the CBO report discourage Congress from increasing the minimum wage from $7.25 to $10.10, and why we actually need an even higher minimum wage:

A person working full time should earn enough to cover the basics like food, housing, transportation, and child care, and still have enough left to save and to spend on miscellaneous goods and services at businesses in their communities. Increasing the minimum wage to $10.10 per hour will still leave many families falling short of that living wage standard, but that is all the more reason that Congress should act to increase the minimum wage.

Allyson Fredericksen is a Policy Associate at the Alliance for a Just Society.