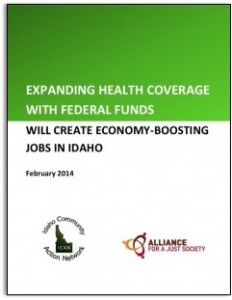 If Idaho accepts federal funds to expand Medicaid coverage, an estimated 88,000 state residents will gain health insurance.  In addition, accepting the federal funding will also create jobs  more than 16,000 jobs and boost the Idaho economy, according to a new report by the Alliance for a Just Society. The report was released today by Idaho Community Action Network.

According to an analysis by University of Idaho economist Steven Peterson, if Idaho adopts the health coverage expansion in 2014, the new spending on health care services and its ripple effects will create 16,337 jobs in the state and increase total compensation by $567 million (in constant 2012 dollars) in 2024. The majority of jobs will be in the health care fields, but others will be created in food and lodging, social services, business services, transportation and construction.

Even better news is that the jobs will be economy-boosting jobs, allowing workers to earn enough to cover their basic living expenses and spend in local businesses. In Idaho, a living wage is $14.49 an hour for a single adult. In a family with two working parents and two children, each adult needs to earn  $17.69 an hour. In Idaho last year, there were 15 job-seekers applying for each opening available a that level.

Here is a link to the full report: Expanding Health Care Coverage With Federal Funds Will Create Economy Boosting Jobs in Idaho.