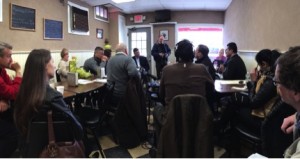 Since Superstorm Sandy hit the east coast in November 2012, small business owners who were promised financial assistance to help their businesses excited abut rebuilding and recovering, are still waiting for the funding to appear. Corinne Horowitz, the business representative for the New Jersey Main Street Alliance, describes their frustration as they search for solutions.

Small business owners who were devastated by Sandy in November 2012 are outraged over the mishandling of Sandy business grants by the New Jersey Economic Development Authority and Gov. Chris Christie’s Administration.

Working with the New Jersey Main Street Alliance, business owners attended the economic development public hearing, townhall meetings, and finally organized a press conference to call for investigation and oversight of the program.

The federal Sandy Relief Bill passed in January 2013 allocated $260 million for the Stronger New Jersey Business Grant Program to provide grants of up to $50,000 to affected businesses “for working capital or construction needs.”  Businesses that were at first relieved by the anticipation of rebuilding and recovering from the storm, soon became dismayed what has turned out to be a daunting process.

Business applicants had their cases transferred several times, had to re-submit and fax the same paperwork repeatedly, and waited for weeks and months to hear back on the application.

“It’s been a nightmare” said Ravinder Valia, owner of Ravinder’s Day Spa in Hoboken.  “If the money is there, it should be given, not just to me, but to everyone who has gone through this ordeal.”

Between June and December, more than 3,300 businesses requested in excess of $167 million in grants.  However, after transferring $160 million out of the program, New Jersey awarded only $10 million to 201 businesses, and disbursed only $6 million by the end of 2013.  Now, nearly a year after the start of the program, the state has only spent $16.23 million.

In comparison, the state spent $25 million on the Stronger New Jersey tourism ad, featuring Gov. Chris Christie and his family at the Jersey Shore, an ad that is mired in a controversy of its own.  The New Jersey Economic Development Authority approved $5 million more for the ad program, making no changes to the business grants.

In response to criticism, Christie has claimed that there is a “lack of demand” for the program.

“My jaw dropped when I heard that somebody claimed there was no demand for the Stronger New Jersey Business Grants,” said Kristen Scalia, owner of Kanibal Home, a shop in Jersey City. “I was outraged when I heard it was the governor himself. He should know better.”

Despite being ignored by Governor Christie, business owners are finally being heard.

Chris Madden, owner of “Charlie’s Place Bar and Grill” told how his restaurant filled with seven feet of water in the storm.  Part of the roof ripped off, and his brand new, $20,000 kitchen was completely destroyed.

He described the frustration of waiting for the grants: “They dangle these giant carrots out in front of you… ‘Do this, do that!’ You feel like you’re jumping through hoops. I feel like a circus animal, you know?”

Despite all his efforts, he’s told it could take another nine months before any money appears.

“It’s as if it’s their job to find reasons not to give out the money,” said Howard Ziperson, who co-owns Long Branch’s Breakwater Beach Club.

“Let me be perfectly clear: the EDA’s stunning lack of urgency and efficiency in administering this program is completely unacceptable,” said Greenwald.  “I will continue to pursue this issue until New Jersey’s small business owners get the answers and action they deserve.”

Corinne Horowitz is the business representative for the New Jersey Main Street Alliance.