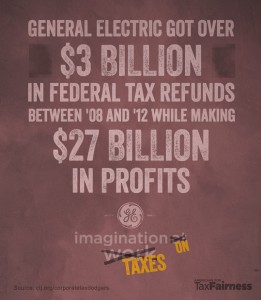 You pay your taxes today – April 15 – and every day, when you shop and buy products for your home or business.

The nation’s most profitable corporations, on the other had, aren’t just avoiding taxes – but actually getting refunds.

General Electric is especially imaginative it seems, when finding ways to short-circuit their tax-paying responsibilities.  When billion-dollar corporations don’t pay their fair share, all of us sacrifice valuable services, healthy schools, good transportation and jobs.

If corporations, like General Electric, paid their fair share, our cities, states and entire country would actually look and feel like the most prosperous nation in the world. Instead, too many of our cities and states look more like third world countries, entrenched in deep poverty.

In the meantime, General Electric, which made $29 billion in profit over a five-year period, received $3 billion in tax refunds.  They aren’t alone. Verizon, Citigroup, Boeing and many other major corporations spend a lot of money making sure they get refunds from the U.S. Government, too.

Congress  has provided tax breaks and loopholes for companies that ship jobs and profits offshore. These loopholes will cost our country $90 billion over the next decade. Right now, a package of 55 tax breaks is moving through Congress.

Bill Daley tracks Washington D.C. action for the Alliance for a Just Society and writes the Daley Weekly report. He said republicans are advocating to make the loopholes permanent. He expects a vote in the senate by the end of this month.

“The Finance Committee package reauthorizes virtually all of the loopholes, including those permitting substantial corporate tax avoidance by placing resources offshore,” said Daley. “This would let them lower tax rates on the rich more easily.”

Daley said a vote on extending the tax loopholes will likely come up for a vote in the House after elections – in the lame duck session.

It is time to elect representatives who will stand up to corporations. And un-elect them when they fail to keep their promises.

We’ve lost our jobs. We’ve lost tax income. We can’t afford to lose the potential that our country has to have healthy, prosperous families, strong, beautiful communities, and a bright future for all.

You pay your taxes. Imagine corporations paying their fair share as well.

Imagine, senior citizens not having to worry about losing their homes if they become ill.

Imagine modern transportation options that take you where you want to go.

Join organizations around the country in demanding that Congress close tax loopholes for major corporations and banks that are costing our country its future.