By Simmi Bagri
Alliance for a Just Society 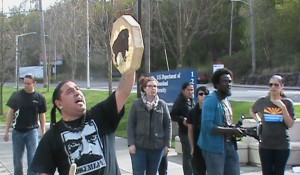 The annual Alliance for A Just Society’s Advanced Native Organizers Training, was sponsored by the Praxis Project and hosted at the  Alliance’s office in Seattle this month, drew leaders from tribes and organizations from around the country. They came from as far as Virginia, Alaska, South Dakota, and New Mexico, and as near as Oregon and the Yakima Valley.

They brought with them their history, their culture, and stories of the injustices being faced in their communities. They brought an array of unique perspectives on issues ranging from fighting for food sovereignty to challenging the destruction of native lands through construction of oil pipelines.

The training included new power mapping tools for small communities, how to use traditional storytelling in our campaigns, and organizing an action. Participants held discussions on theories of change and messaging for Native communities. We specifically tailored this training to be both culturally appropriate, and useful in either urban or reservation settings.

The highlight of the training was putting some of what we learned to work in real life. Native leaders joined other organizations at the Bill and Melinda Gates Foundation to protest the philanthropic organization’s investments in private prisons. 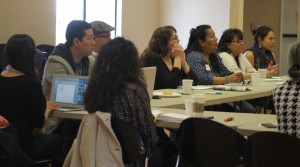 Next, after learning of the hunger strike and retaliation against prisoners at the Tacoma Detention Center, the Native leaders joined the Not One More campaign at the Immigration, Customs and Enforcement (ICE) office to protest detention and deportation of immigrants.

“We Say They Can Stay!” and “Migration is a Human Right!” they chanted, bringing a new voice to the immigration reform movement and a show of solidarity.

Native people have also been displaced from their homelands; and racially profiled by police and ICE agents, and held in private prisons in disproportionate numbers. They understand too well the suffering and loss – and the need to organize and build power.