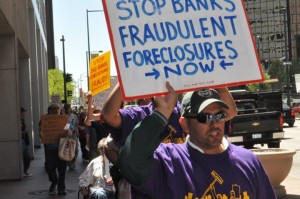 After three years of persistent and tireless work by Colorado Progressive Coalition members, the Colorado legislature this month finally passed meaningful protections for homeowners at risk of losing their homes.

For years horror stories have abounded in the press of banks that lost paperwork, homeowners never speaking to the same person twice, promises of a loan modification while simultaneously foreclosing on the borrower. Abuses by the banks added to the immense stress homeowners – and added to the growing number of foreclosures that could have been prevented.

The package of protections passed by the Colorado legislature is known as the “Homeowners Bill of Rights,” and is similar to those passed previously in California, Nevada, and Minnesota.

One of the main functions in the law is that it requires a lender to establish a single point of contact for the borrower to communicate with the lender concerning a pending foreclosure. This is designed to eliminate the run around that many homeowners report while dealing with lenders during the foreclosure process

Another key protection in the Colorado statute is elimination of the practice known as dual tracking. This is where the lender promises the homeowner a modification and the homeowner is working on this “track.” Meanwhile the lender is simultaneously proceeding with foreclosure. The homeowner usually ends up in foreclosure even though another remedy was possible.

The Colorado bill will require the lender to inform the homeowner in writing that a completed loan modification application has been received and is under review. If the lender then continues with a foreclosure the homeowner may contact their county Public Trustee. The Trustee will then have authority to stop the foreclosure process.

“By giving the county trustees the power to stop a foreclosure when an individual is undergoing a loan modification, Colorado will put into law a system that keeps families in their homes and creates greater stability for our housing market,” said Corrine Fowler, a housing advocate formerly with the Colorado Progressive Coalition, who pressed for the bill’s passage.

It’s a sad shame it took the Colorado Legislature three years to pass these common sense protections that could have saved thousands of homes. The foreclosure crisis has largely abated in metro Denver, but the ramifications of the crisis will reverberate for generations. Untold numbers of families have had their economic futures ruined by this crisis, through lost wealth and destroyed credit.

Meanwhile rents continue to soar in one of the hottest housing markets in the nation putting many of these displaced families in harm’s way again.

Jason Collette is a national organizer for the Alliance for a Just Society.