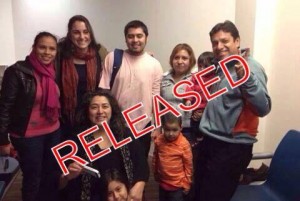 Last week when I received a call from Multnomah County Chair Marissa Madrigal and then from Sheriff Daniel Staton, I wondered if the sheriff might finally be reconsidering his policy on holding immigrants in jail at the request of Immigration and Customs Enforcement (ICE).

But I never could have anticipated this conversation – or what followed.

Sounding unusually cheerful when I returned his call, Sheriff Staton told me he would soon announce that his office in Multnomah County, along with sheriffs in Washington, and Clackamas counties would all be opting out of ICE holds.

He said no one had been certain about what the law really was, so for years, law enforcement simply cooperated with ICE agents. But now, a federal court ruling made it perfectly clear that holding someone in jail extra time because of an ICE request is against the law.

Within days, 17 counties in Oregon announced they would no longer collaborate with ICE. Now cities and counties in other states are making similar announcements.

The practice of honoring ICE holds has torn thousands of families apart, and led to some 2.3 million deportations since 2008.

And while it was the ruling of a federal judge that ultimately pushed sheriffs across Oregon to change their policies, it was the activists throughout the state and across the country who made the ground ready for the change. For years, organizers and brave community members have fought to show that ICE holds are not mandatory.

Federal Court Judge Janice Stewart’s decision in Oregon will have national implications. This is a critical time, with momentum building, for legal groups and community organizations to come together to pursue a strategy so courts across the country can continue to affirm that ICE holds violate constitutional rights.

Oregon’s success was the result of strong partnerships that were built across diverse groups of advocates. While lawyers waged the fight in the courts, organizers and community members can begin important conversations with their sheriffs and commissioners in their communities.

Sheriffs need to be ready to make the change, whether or not it comes at the direction of the court – and only the community can make that happen.

For years, jails across the country have been used to detain immigrants solely for the purpose of assisting Immigration and Customs Enforcement (ICE) in deportation. This collaboration has been conducted through an information-sharing surveillance system called Secure Communities that alerts ICE every time a potentially “deportable” person gets booked in a local jail.

The Secure Communities system triggers a detainer request, known as an “ICE hold,” on that person for a minimum of 48 hours after their charges are cleared. Detainers usually last far longer than 48 hours. Those under an ICE hold are not allowed to post bail.

ICE holds are not mandatory, despite what many think, and a movement has grown across the country to opt-out of them.

In the recent court case, Maria Miranda-Olivares was kept in custody by the Clackamas County Sheriff after her charges had been resolved because ICE issued a detainer request to the sheriff’s office. She sued Clackamas County for violation of her constitutional rights.

Stewart agreed that Miranda-Olivares’ Fourth Amendment rights were violated when the County incarcerated her without probable cause based on ICE’s request to detain her. Because Clackamas County violated her constitutional rights, they will have to pay her.

The court decision spurred the announcement from sheriffs in Clackamas, Multnomah, and Washington counties that they no longer would be holding folks for extra time in jails solely because of an ICE hold. Once the first three counties made the announcement, sheriff after sheriff followed suit, each announcing that they too would also be opting out of ICE holds.

As a member of the Activists Coming Together (ACT) Network, the Center for Intercultural Organizing has worked hard to convince our local jails to stop honoring ICE holds, and to keep our families together. We are worker and immigrant rights groups, civil rights advocates, lawyers, and faith leaders.

In March last year, in response to community pressure, Staton announced that he would no longer honor holds for people charged with very low level crimes.

It was a step in the right direction, but we knew that the move was not sufficient for keeping our communities safe, or rebuilding trust in law enforcement. We continued to pressure MCSO to expand its policy.

I became a designated contact for communication with the sheriffs’ office. We continued to organize around specific deportation cases in order to highlight the inadequacy of the policy. Throughout, we built relationships with the Multnomah County commissioners and our congressional delegates for their support, and informed the media of unjust deportation cases.

We also began to organize a statewide strategy, and began to meet with the Washington County sheriff about the issue.

After the court decision, it was astounding to see county after county announce that they too would stop honoring ICE holds. Now sheriffs in Clackamas, Crook, Deschutes, Gilliam, Hood River, Jackson, Jefferson, Lincoln, Marion, Multnomah, Polk, Sherman Wasco, Washington, Wheeler, Yamhill, and Lane counties have announced they will no longer be honoring ICE holds.

We can expect to see these announcements continue throughout Oregon – and the court decision is expected to have effect across the country. Oregon will be a more just place for all, a place where immigrants and refugees can feel safe calling the police if they are victims of crime and families can stay together.

Nicole Brown is the field director for the Center for Intercultural Organizing.