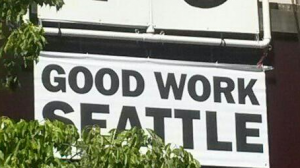 The Alliance for a Just Society congratulates Seattle on making history today by unanimously passing a path to a $15 minimum wage – the highest in the nation. Seattle Mayor Ed Murray said he would quickly sign the legislation into law.

More than 100,000 workers – disproportionately women and people of color – work minimum wage jobs in Seattle and will directly benefit from the increase. The whole city will benefit from the City Council’s courageous action.

“The victory in Seattle sets the stage for minimum wage victories in other states and nationally. We can’t wait for legislators to decide what’s best for working families, we have a responsibility to step up, be heard, and make change ourselves,” said Alliance Executive Director LeeAnn Hall.

The Alliance and our affiliates played pivotal roles in organizing efforts to pass the $15 minimum wage.

Washington Community Action Network, and One America – a brand new Alliance affiliate – served as community co-chairs of the mayor’s “15 for Seattle” coalition of labor, small business and community groups.

Washington CAN! members knocked on thousands of doors, collected signatures, and delivered 2,000 postcards to the City Council. One America organized and mobilized the immigrant community and businesses, especially gathering strong support from Somali business owners.

Main Street Alliance leaders worked tirelessly behind the scenes to help craft elements of the plan, and provided critical support leading up to today’s passage by city council, including a storefront poster campaign for small businesses to show their support.

Early in the negotiations, Alliance Associate Director Jill Reese met with the mayor’s Income Inequality Advisory Committee and participated on a panel at the Seattle Income Inequality Symposium. She presented information from our state and national Job Gap study America’s Changing Economy.

Alliance research was used consistently to show that raising the minimum wage to $15 is a necessary move toward ensuring that families in Seattle earn enough to make ends meet. The living wage in the Seattle area is actually closer to $17.55.

Days before a preliminary City Council Committee vote last week, the Alliance and Washington CAN! jointly released a report by our Senior Policy Associate Ben Henry, “Reversing the Trend,” analyzing more than a decade of living wage data in Washington. The report illustrates how Seattle’s path to $15 will dramatically reduce the gap between a living wage and minimum wage.