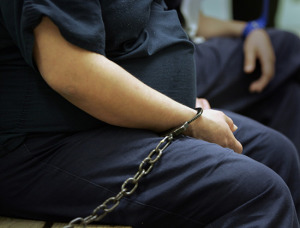 As poverty levels in the U.S. increase, safety nets are  slashed, and families are left with few options for survival. As a result, more people are forced into difficult economic decisions, including alternative street-based economies and crime from sheer economic desperation. Many of these people are women and mothers.

Among women who are fortunate enough to have employment – women of color, are still making 64 cents on the dollar compared to men. (For white women, it is  77 cents on the dollar.) These women are also most likely to be the primary caregivers for children. Add in the high cost of childcare and the amount of money that women have left to live on is abysmal.

Considering the extreme tensions placed on the lives of women, the increase in arrests and sentencing of mothers and pregnant women is not unexpected. The treatment that the women receive, once they are in prison or jail, should be.

From the rash of recent news reports it has become clear that there is no standard practice in prisons on how to deal with pregnancy in prisons. The lack of regulation has left the standard care of the women dependent on the place they are sent and the warden who oversees them.

Keep in mind also the growing private prison industry with a primary goal of increasing profits every year – often at the expense of their prisoners.

Some county jails report a dramatic increase in women prisoners – from 20 two decades ago, to 300 women each year now. With figures like this, it would be expected that the prison system would have policies, procedures and safety-nets in place to be able to address the health needs of pregnant women.

One extensively reported incident is that of Nicole Guerrero who was 8 ½ months pregnant upon entering Wichita County Jail, in Texas. Two weeks later when she began experiencing contractions, she notified prison officials but was sent back to her cell by the detention officers. Throughout the night and into the next morning, she made her plight clear to the officers, and continued to press the emergency button, but was ignored. At some point, she was transferred—to solitary confinement. After hours in labor there, they gave her a mat.

After a number of hours, an officer walking by her cell noticed the baby’s head emerging and went to assist Guerrero. The umbilical cord was wrapped around the baby’s neck and was constricting its breathing. The Officer was not able to handle the complication and is also alleged to have not even attempted CPR. It became too late. Guerrero and her child were then transported to a local hospital where the newborn was pronounced dead.

According to Lita Pepion from Alliance affiliate, Indian People’s Action (IPA) of Montana, cases like that of Guerrero in Texas, are increasingly common throughout the country.

“Prisons notoriously provide less then quality healthcare and prison and healthcare agency officials always deny wrong doing, even when it’s apparent that they either had no protocol or just plain refused to monitor and listen to inmates,” said Pepion.

Healthcare for all prisoners is something Pepion and IPA have been pushing back against in their fight to end criminalization of Native Americans. Native people in the United States endure the highest incarceration rate of any racial or ethnic group, at 38 percent higher than the national rate.

IPA’s current campaign has launched an investigation of human rights violations occurring in Crossroads Correctional Facility in Shelby, Montana. They are calling on the state’s immediate intervention.
In a country that too often puts profits over people, it becomes acceptable to push sectors of the population to points of economic destitute, while corporations are raking in record profits. Criminalizing people for crimes of economic desperation, and denying people their basic needs and human rights, all for the sake of profit becomes an acceptable norm under our current structure. Communities are coming together to shift this paradigm, and the Alliance will be there to throw-down and support the work where it’s happening.