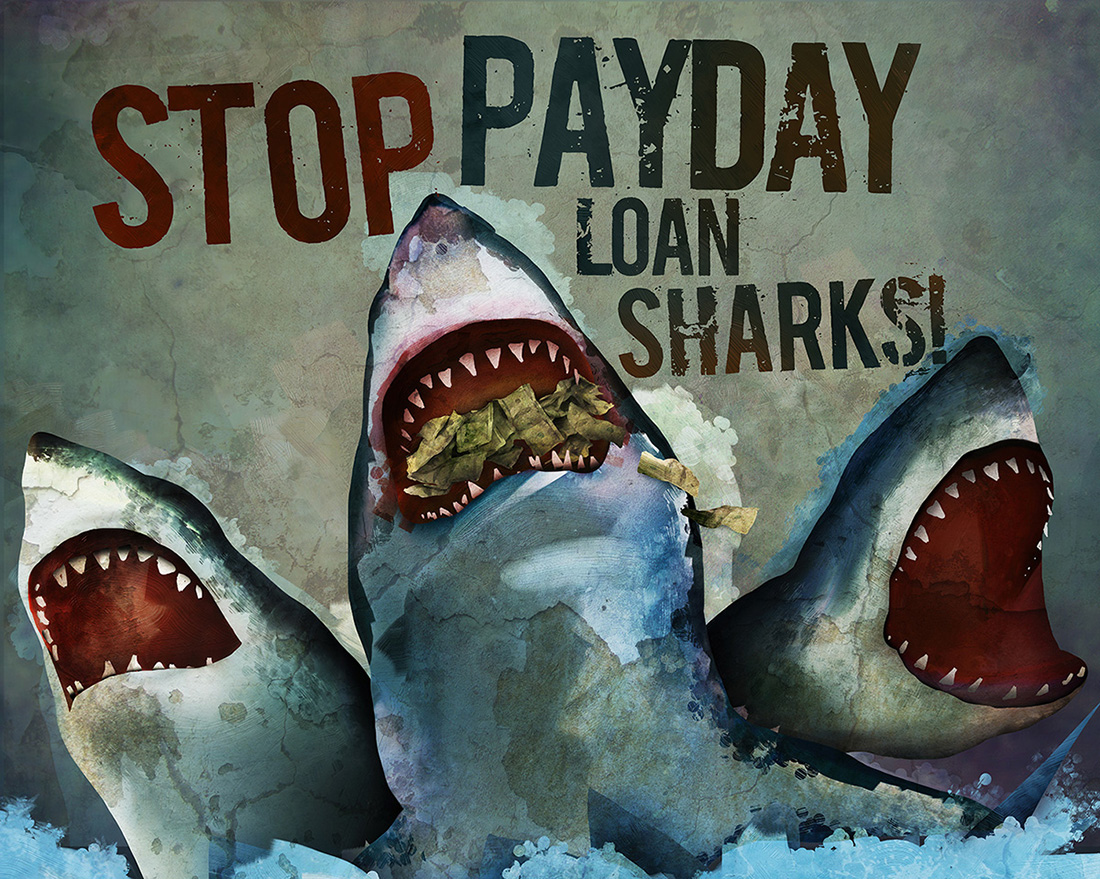 It’s Shark Week! While ocean going sharks will be in the spotlight, it’s the predatory payday loan sharks that are the real danger in our neighborhoods.

This year, we’ve got a chance to build a lifeboat to keep our families out of harm’s way with new proposed rules from the Consumer Financial Protection Bureau. The only problem is that the boat is full of holes, and a leaky boat won’t keep the loan sharks at bay.

This Shark Week, demand the CFPB plug the leaks in their proposed rule.

The business model of payday and car title loan sharks is to keep people trapped in endless cycles of debt. These sharks rely on direct access to borrowers’ checking accounts and holding the title to your car to get paid first. That’s the definition of predatory. The CFPB rules must truly dismantle the debt trap by letting payday lenders make a loan only when they have made sure the borrower can afford to pay it back.

Right now the CFPB proposed rules don’t guarantee that. They need to hear from you. Tell the the CFPB to plug the holes in their proposed rule so our communities are safe from predatory payday loan sharks who put profits over people.

This #Sharkweek, let’s make sure we come out ahead of the loan sharks. 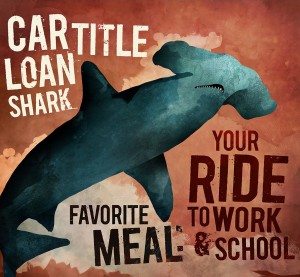 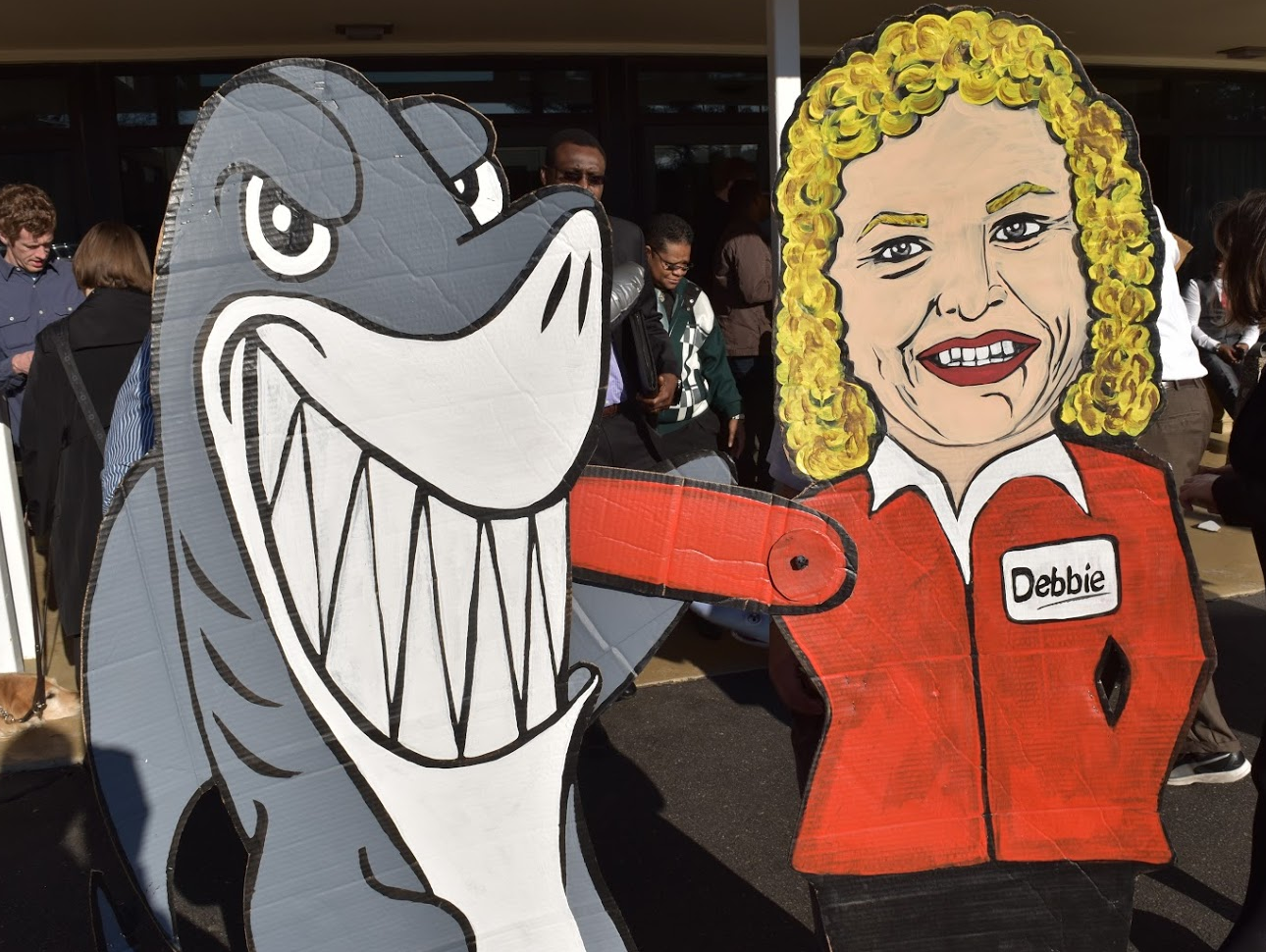 Debt-Trap Debbie needs to stop shilling for predatory payday lenders who siphon $8 billion in fees and interest each year from those who can least afford it.

That was the message delivered this week to Florida Rep. Debbie Wasserman Schultz’s doorstep at the Democratic National Committee, which she chairs, by a hundred grassroots leaders from National People’s Action, Alliance for a Just Society, USAction, and allies.

Decrying the “Sharknado” of debt brought on by the loan shark industry, the leaders arrived with more than 13,000 signatures calling on Wasserman Schultz to stop accepting money from the payday lending industry and stop sponsoring legislation that prioritizes predatory lenders over everyday families. 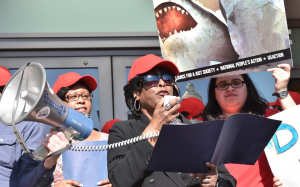 The grassroots leaders found the doors to Wasserman Schultz’ office building closed to them – so they turned up the heat with chants reminding Wasserman Schultz that they were determined to beat back the shark attack.

While leaders waved signs reading “Sharknado 4, starring Debbie Wasserman Schultz, produced and directed by the payday loan industry,” speakers from throughout the country testified to the devastation they and their communities have suffered.

“Once you’re swept up into the tornado of debt one loan turns into another in a cycle that just doesn’t let up,” said Candice Byrd, a member of Illinois People’s Action who spoke at the event. “It has been a nightmare for my family and me. We need our elected officials to stand with us against these predators, not in their pockets.”

Wasserman Schultz is cozy with the predatory payday lenders, having taken $68,000 in campaign contributions from the industry over the last 10 years. 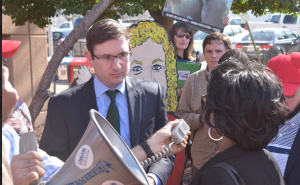 Now she’s co-sponsoring legislation that would gut the Consumer Financial Protection Bureau’s efforts to crack down on these debt predators – and she’s lobbying her colleagues in Congress to sign on as well.

The Los Angeles Times’ David Lazarus calls her bill (H.R. 4018) “a shameless effort by the payday-loan industry, acting through congressional proxies, to avoid federal rules that would require more responsible behavior. The only choice it offers consumers is the ability to keep taking out high-interest loans even if it’s clear they can’t make payments.”

That’s why the leaders chanted even louder as barricades were brought out, then prayed for families devastated by predatory payday lenders – and for Wasserman Schultz, who does the bidding for an industry that charges up to 390 percent in interest rates.

The voices of so many persistent leaders were too powerful to ignore. After at first resisting a meeting, a representative for Wasserman Schultz emerged from behind the doors to accept the petition and a letter to Wasserman Schultz.

The leaders who descended on the Wasserman’s Schultz’s office will continue the fight.

They are determined not only to stop legislation bought by the predatory debt industry but to also win strong rules from the Consumer Financial Protection Bureau. Joining with Stop the Debt Trap Campaign, they will push for a small-dollar credit system that meets the needs of families and communities, and helps build an economy that’s equitable for all. 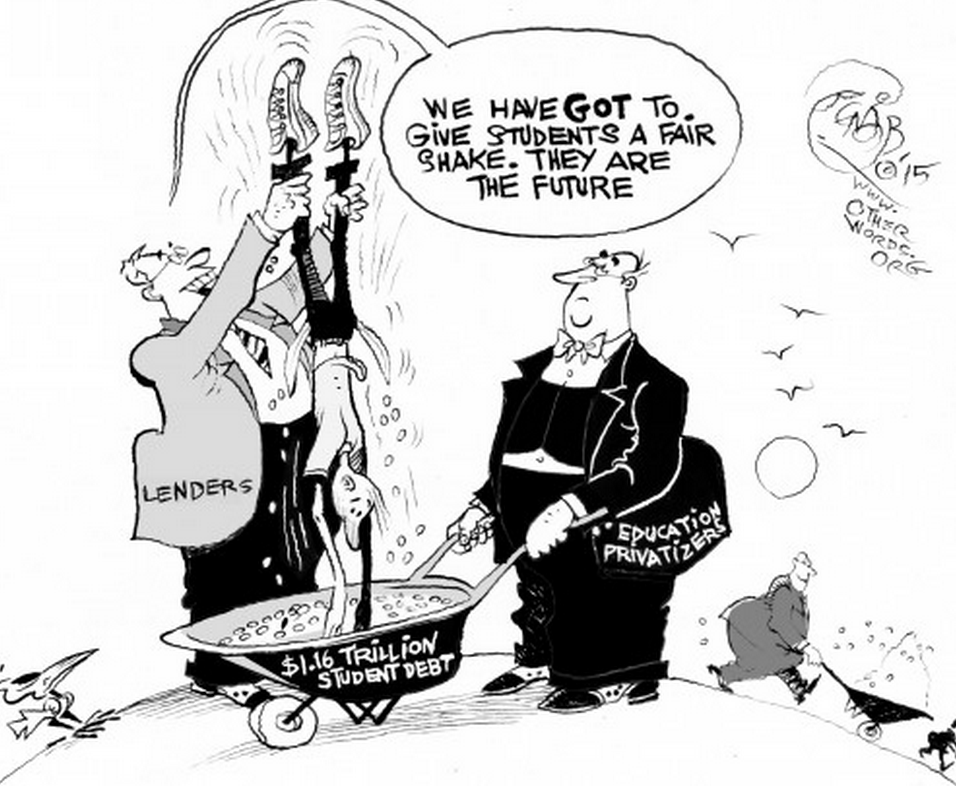 Years after Toni Potter’s husband passed away from pancreatic cancer, debt collectors in her state of Washington were still relentlessly hounding her about his hospital bills.

Andrea Anderson, a young student in Oregon, has been saddled with $150,000 in college loans as she pursues her dream of becoming a social worker. She knows she’ll be paying the loans back for decades, threatening her other dreams of buying a home or starting a family.

Linda Mock of Idaho was trapped by a payday loan that quickly grew from the original $300 to more than $900 in interest alone. Trying to break free of the debt, she took out a title loan on her car and ended up losing her only transportation.

Family debt is no personal failing — it’s a national crisis. Even as unemployment declines, the debt crisis is holding back a full economic recovery and pushing more people into poverty.

That’s why President Barack Obama announced recently that he’s instructed the Department of Education and other federal agencies to do more to help borrowers afford their monthly loan payments.

That’s a step in the right direction.

But I’d urge him to go further and rein in the lenders, banks, and collection agencies that are profiting from Americans’ debt. It’s time to stop blaming borrowers and instead hold the financial interests that created the crisis accountable.

When hospitals give big price breaks to insurance companies but refuse to work with a widow struggling to make ends meet, something’s not right.

When payday lenders can get away with charging 300-percent interest on a short-term loan to a poor family just trying to fix their car so they can get to work, something’s not right.

The explosion of predatory lenders hurts families and siphons money out of local economies. There are more than two payday-lending storefronts for every Starbucks coffee shop in the United States.

Meanwhile, more than 70 percent of the students who graduate with a bachelor’s degree leave school deep in debt. The average student loan debt totals almost $30,000 today, up from $19,000 a decade ago.

For many Americans, there’s no way out.

Student loans can’t be discharged in bankruptcy. Some states will take your your driver’s licenses and professional certifications if you fall behind in your student loan repayment.

And if you can’t afford your legal fees, you could go to jail — just for being poor.

It’s time to break the shame around debt and start putting the responsibility for solutions where it belongs: on those profiting off struggling families. That means placing fair caps on interest rates, ending predatory practices that push people further into debt, and creating a path out of debt for people who are struggling.

Recently, folks from different communities across the country came together for a national online conference, “Up from Debt,” hosted by my organization, the Alliance for a Just Society. People from Seattle to New York shared powerful and moving stories — not to gain sympathy, but to erase the stigma that further burdens families trapped in debt.

The Obama administration should investigate all forms of predatory lending, including student loans, payday loans, medical loans, mortgages, and credit cards. On the White House website, you can sign a petition asking the president to create a pathway out of debt so families can reclaim their futures.

Our children, our neighbors, our parents, the sick, and the struggling aren’t cash cows for bankers and lenders to milk. It’s time to demand solutions that help families move up from debt.

LeeAnn Hall is the executive director of the Alliance for a Just Society, a national policy and organizing network that works on racial, health and economic justice issues.