All across the country, lawmakers are faced with grim state budget shortfalls that will mean devastating cuts to the social safety net. As a result of the national recession, Washington state faces one of the worst economic downturns in over 80 years. In the past two years lawmakers have balanced the state budget by cutting $5 billion in critical services including health care, education, the environment, services for individuals with differing abilities, and other safety net programs. Many of the programs that have been eliminated or are slated to be eliminated are programs that communities of color rely on.

In response to these crises, Washington CAN!, and Alliance for a Just Society affiliate, kicked off a season of direct action on Martin Luther King Day to advance policies that increase revenues and preserve public programs that are critical to communities.On MLK day, Washington CAN! led a group of thirty-one organizations across the state in a march and rally at the State Capitol in Olympia. Over 800 people from all over Washington took the day off to meet with lawmakers, meet fellow community members, and honor Dr. King’s legacy by standing up for racial and economic equity.

The diverse crowd marched through the streets of downtown Olympia and flooded the capitol steps, hundreds of them carrying signs that read “People Not Profits” and “Bankers Lied, Economy Died.” Another sign compared the hourly wages of teachers ($26/hour) to that of the Chase CEO ($17,145/hour), asking “Who Should Sacrifice?” (In a brilliant and unscripted move, some members left these signs directly outside of a Chase branch along the march route.) 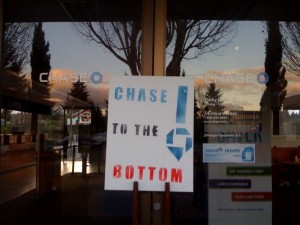 While cuts to essential services abound, one thing lawmakers haven’t cut are unjust and outdated corporate tax loopholes. At the moment, Washington State forgoes $6.5 billion in funding each year as a result of tax breaks for businesses. The wealthiest 1% of Washington residents pay less than 3% of their income in state taxes, while the poorest 20% pay 17% of their incomes in state taxes. This means that while low-income communities and communities of color have been paying more than their fare share in taxes, they are bearing a disproportionate share of the budget cuts while corporations continue to get breaks.

Speakers at the rally told members of the crowd, many of whom went on to meet with and lobby their lawmakers that afternoon, to urge legislators to put closing tax loops on the table in budget discussions. The message they brought to their representatives? Put people before profits and produce a racially just budget. Constituents asked lawmakers to sign on to Washington CAN’s “Principles for Budget Equity,” which asks legislators to consider who would be most affected by budget cuts – low-income people and people of color – before they make decisions.

Monday’s People’s Summit and Lobby Day is part of a growing, ongoing movement to educate lawmakers and raise people’s awareness about how budget and policy decisions affect different communities. What a better day to deliver this message to lawmakers than on Martin Luther King, Jr. Day, when Dr. King’s vision of economic and racial equity is even more powerful

This post was written by Fatima Morales of Washington CAN!