This is part eleven in a series of posts that will explore some of the leading organizations from around the country that are engaged in unearthing and combating the influence of money in the political process.

In February 2011, on “Bankers’ Day on the Hill,” grassroots organization Washington Community Action Network confronted corporate bank lobbyists head-on. Lobbyists had descended on the Capitol to try and dissuade lawmakers from voting for a bill that would eliminate outdated tax breaks for Wall Street banks and raise revenue for a state facing a $5.6 billion budget deficit. Washington CAN! members donning Hazmat suits, surgical masks, and protective goggles patrolled the Capitol and handed out “lobbyist disinfectant kits” to legislators so they could protect themselves from lobbyist germs of misinformation. 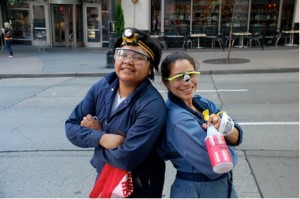