On a beautiful sunny Seattle Saturday, 400 south Seattle residents took to the streets to demand that JPMorgan Chase Bank reinvest money in the communities they have destroyed. The community members — parents, students, workers, homeowners — demanded that Chase reinvest money in the form of principle write down for every Washington homeowner. They also called on Chase to invest in a community jobs fund that would create over 30,000 jobs for the neighborhoods hardest hit by the economic crises created by the reckless gambling of Chase and other big banks. 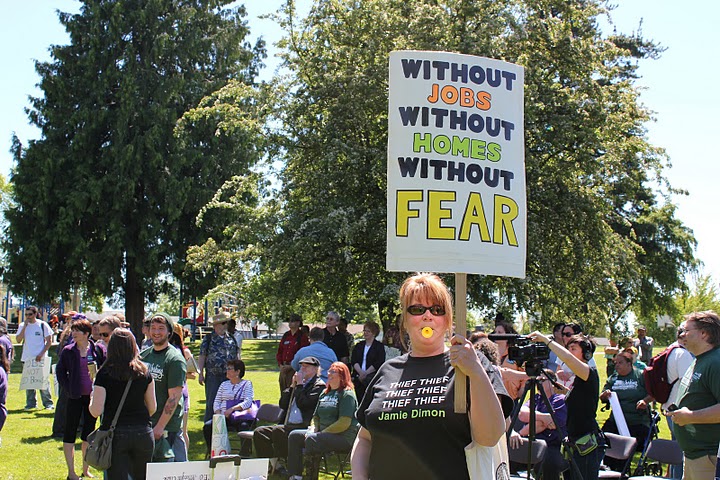 The rally started at Othello park, where Washington CAN!, OUR Washington, and Working Washington members shared their stories of how Chase has stripped their wealth away.  For one woman, Chase refused to negotiate her home loan, which is  75% paid off. Another woman was laid off, along with 3,000 of her local colleagues, when Chase bought Washington Mutual bank. Yet another woman spoke of how Chase nickels and dimes the state’s most vunerable citizens by not paying taxes, forcing cuts in TANF, and collecting a fee on every EBT transaction.

The crowd, riled up and angry after hearing theses stories, marched to the local branch on the corner of Martin Luther King Boulevard and Othello Streegt, where branch managers and local police refused to let a group of representatives inside the bank. When asked to fax a letter of demands to Jaime Dimon, the branch manager gave the outrageous claim that it was against company policy to fax letters to his boss.

Not deterred from the set back, the crowd spoke from outside the bank. They said that enough was enough, and demanded  nothing less than full responsibility from the bank that caused so much pain for so many working families. While they stood outside the walls of the bank, the message was still delivered, loud and clear.

Call the Washington Chase media relations contact at 425-444-2500 and let her know you demand real jobs and accountability for Washington families, and go to www.washingtoncan.org for upcoming events.