As part of the escalation of tactics against mortgage giants Fannie Mae and Freddie Mac, members of Alliance affiliate Progressive Leadership Alliance of Nevada (PLAN)  joined Right to the City, ACCE and others to bring the fight directly to Fannie Mae at their regional headquarters in Los Angeles last week. Hundreds of people facing foreclosure took over the lobby of the Fannie Mae office in Pasadena and told their stories of how the mortgage giants haven’t worked with them, refused to write down principle and are one of the only servicers proceeding with foreclosures even though the chain of title issues due to fraud remain.

This summer, Fannie Mae head Ed DeMarco said that Fannie Mae shouldn’t and wouldn’t do principle reduction for the millions whose mortgages are owned by the Governmental Sponsored Organizations. There is widespread support for the notion that widespread principle reduction is the only way to get the housing market to reset, including the Win Win Report by New Bottom Line.

With the kneejerk resistance to reducing principle for homeowners to current values from the largest holder of home loans, the housing market will continue its drag on the broader economy. The Alliance and its allies have called on the President to fire DeMarco and proceed with wholesale principle reduction for homeowners.

In addition to taking the fight directly to Fannie and Freddie, there is renewed effort to make this a campaign issue. Neither Romney nor Obama has laid out a plan to right the housing market. Alliance groups will be organizing to raise this issue in the first debate that takes place Oct 3rd in Denver.

There was little new brought out at the press conference. Led by presentations from White House economic advisor Gene Sperling and HUD Secretary Shaun Donovan, the Administration largely defended their record, blaming limited results on the banks, Congressional gridlock, and a lack of direct authority over governmental agencies involved in foreclosure regulation.

In question sessions and break-out meetings, advocates and homeowners facing foreclosure fought back, offering dramatic personal stories about the destruction of family life and livelihood that has resulted from a lack of strong governmental initiatives.

Foreclosure victims and advocacy groups then bussed up to Capitol Hill to meet with Senators and Congressmen, carrying a message about the need for strong action to save millions of homeowners from foreclosure. PLAN and the CPC members attended the sessions and made Hill visits to the offices of Senators Reid, Heller, and Bennett.  Conference briefings and preparation were provided by staff from PICO, National People’s Action, and Alliance for a Just Society, all partners in the New Bottom Line coalition. 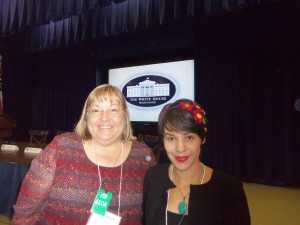