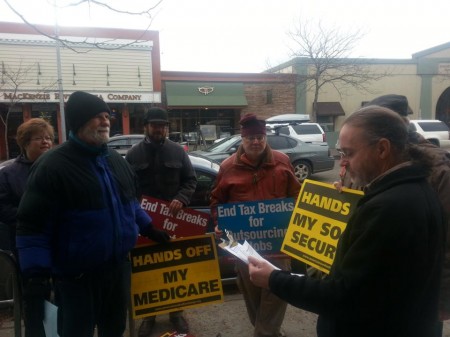 Over the last three decades the average family income has stagnated while the top 2% has seen their portion of the national income quadruple– at the expense of working families. This week, Alliance affiliates across the country mobilized in a series of actions to emphasize the message that was sent in last week’s election. Voters spoke loud and clear: we want to prioritize the 98% over failed austerity policies by out of touch leaders that want to give additional hand-outs to the super rich. As part of the American for Tax Fairness day of action, affiliates in Colorado, Maine, Montana, Nevada, Oregon and Washington held activities to demand that Congress stand up for working people and end the Bush tax give-aways to the super wealthy.

As Congress returns to session, they will be debating some critical issues that will deeply impact the lives of millions. Congress is facing the threat of sequestration and automatic cuts if a resolution cannot be found. The President and leaders on both sides of the aisle are discussing “compromises” and throwing around terms like the “Grand Bargain” and where cuts could be made to Medicare, Medicaid and Social Security.

One of the most fundamental takeaways from this election was that voters don’t want to compromise these critical programs which Congress should be working to expand during this time of need. Cuts to these and other safety net programs are deplorable at a time when House Republicans passed a budget that would expand the Bush tax breaks to offer an additional $160,000 to millionaires.

This all boils down to a simple question: who should pay? Millionaires with disposable incomes, health insurance, trust accounts, stocks, bonds, plush retirement savings, inheritance plans for several future generations? Or disabled adults who rely on homecare, senior citizens that live in nursing homes, low income kids without health insurance, and everyday families that have worked day in and day out unable to afford retirement savings and will rely entirely on the social security they have been paying in to? The choice shouldn’t be a difficult one.

Alliance affiliates and their leaders are sending a strong message to Congress as they return for the lame duck session: the idea of a “Grand Bargain” is no bargain at all. We are going to hold our elected officials accountable, and do not want them to sell us out for the super rich. Everyday families are not willing to accept deals where programs and services they depend on in their daily lives will be cut. We must, at the least, return to the Clinton era tax brackets where Millionaires paid their fair share.