After days of rain and snow in Anchorage,Alaska, the skies cleared and it warmed to chilly 34 degrees just in time for 400 Natives to rally in a park to call for an end to increasing regulations, enforcement and criminalization of their traditional way of life.

A unique scene in Alaska: 400 Natives taking to the streets with picket signs, unafraid of backlash, no longer willing to compromise on life’s essentials, calling on elected officials to take action and make changes. 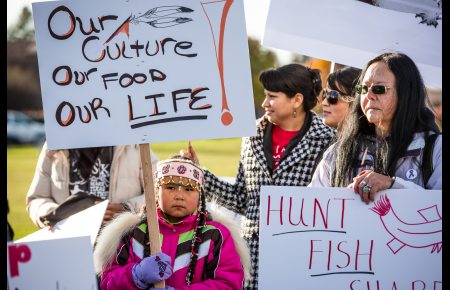 The rally was organized by a unique mix of tribal, corporate and nonprofit community groups. With contentious political drama between groups, the unity displayed in this effort was unprecedented. The Alliance offered technical assistance and on the ground support to the group that organized the event as part of the Communities Creating Healthy Environments initiative, which addresses systemic reasons for health disparities in communities of color.

This summer, there was a record shortage of salmon in Alaska. Those baring the brunt of this shortage were the families that rely on the fish they catch in the summer months to sustain them through the winter. State and Federal officials were giving out sanctions and even arrested a group of traditional fisherman who were simply doing what their people have done for thousands of years- fish to feed their families.  Creating a social media frenzy was an incident where a family had their nets cut and fish seized by state officials- a highly offensive act.

The state’s refusal to recognize the rights of Alaska Native’s is at the heart of the issue. The rally called for the right to hunt and fish on all of Alaska’s lands and waters. The people also called for increased, meaningful co-management of the natural resources- sighting thousands of years of experience and federal directives for the state agency to do so.

With snow sprinkled mountains as the backdrop, the rally opened with a group of traditional dancers. Speakers shared personal stories and rally cries energizing the attentive crowd. As the rally continued, many of the youth went to the street with signs and sang traditional songs as cars whizzed by honking to show support; making an eerie soundtrack for program on the stage.

The rally concluded as it started- with traditional songs and dancers bringing it home in a touching, defiant stance of cultural pride and preservation in the face of attempted genocide.

In the days following the rally, both Senator Murkowski and Senator Begich came out with statements in support of Alaska Native subsistence rights. The community is looking forward to holding them accountable to real action, such as leading a federal charge and calling for substantial changes in state policy.

Keep your eyes peeled for a report and storybook released this fall from the Alliance and the Council of Athabascan Tribal Governments on this issue.

To read more and view pictures from the rally, see: http://www.alaskadispatch.com/article/alaska-natives-rally-restored-aboriginal-hunting-fishing-rights