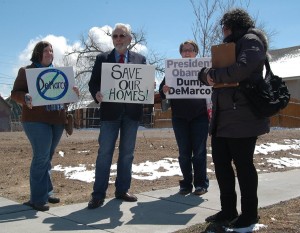 Fred and Sophia Patterson have a mortgage that was bought from Bank of America by Freddie Mac. When Mr. Patterson had his identity stolen, he lost everything, and asked for some assistance. The Pattersons accepted a temporary loan modification and continued to pay the adjusted monthly amount, never missing a payment, while they worked on securing a permanent loan modification.

Freddie Mac has made weekly calls threatening the Pattersons with foreclosure. “It doesn’t make sense that they can foreclose on you at the very same time that you are trying to work with them. We even went through the Public Trustee to prove that we are up to date and working on getting things adjusted, and we are still getting this run-around,” says Mr. Patterson.”

Still, they continue to receive weekly calls threatening foreclosure. “As a representative of the people of this city, I am deeply concerned with what foreclosure means in terms of loss of wealth for homeowners, and I know that many people in Pueblo are underwater and need relief. Principal reduction would really give us a boost,” said Pueblo City Council President, Steve Nawrocki.
Nawrocki joined a rally yesterday held by the Colorado Progressive Coalition and The New Bottom Line. The simple message “fire Ed Demarco” who is head of the Federal Housing Finance Agency.
The neighborhood where they held the rally is just one in Pueblo that has been hit hard by foreclosures. The Pattersons, sadly, are not the only ones that Fannie Mae and Freddie Mac are unjustly dual track: Where borrowers can be processed for loan modifications and yet remain targets of foreclosures. With both these efforts in play, homeowners, borrowers, are losing their homes while making payments. “It doesn’t make sense that they can foreclose on you at the very same time that you are trying to work with them,” said Mr. Patterson.

Under DeMarco’s lead, there seems to be no end in sight in how he and the agencies he directs unfairly target homeowners. Replacing DeMarco as the head of the Federal Housing Finance Agency (Fannie Mae and Freddie Mac) would help us start moving in the right direction again. DeMarco is blocking principal reduction in mortgages, which would help people stay in their homes, stabilize neighborhoods, and create jobs. We need an FHFA Director who will put homeowners first.
“DeMarco’s actions are driving millions of Americans into foreclosure and record debt,” said Tracy Van Slyke, Executive Director of The New Bottom Line. “We are fed up, and it is time for President Obama to act on his promises to America’s middle class by dumping DeMarco and nominating a permanent director who will move principal reduction at Fannie Mae and Freddie Mac and stand with all homeowners and taxpayers.”