Small business owners across the country are weighing in on the immigration debate. Their message: small businesses support immigration reform with a roadmap to citizenship. 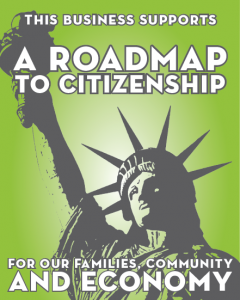 At May Day rallies tomorrow, around the country, small business leaders will be addressing the crowds; speaking up for comprehensive immigration reform. It seems a good moment to remind ourselves where exactly small business owners stand on this issue.

The poll drew media attention across the country, including coverage in the LA Times, Bloomberg Businessweek, Entrepreneur, the Arizona Republic, and the Las Vegas Sun.

At the state level, Main Street Alliance affiliates organized local events and activities to raise up small business perspectives in the unfolding dialogue over immigration reform:

In Maine, the Maine Small Business Coalition hosted a press conference on April 4 at an immigrant-owned small business in Portland releasing the results of the poll and highlighting the stories of immigrant business owners in Maine.

In New Jersey, the New Jersey Main Street Alliance joined the New Jersey Immigration Reform Coalition at a press conference on April 2 to share the poll results, and co-sponsored a forum with the American Jewish Committee and local chambers of commerce about the economics of immigration reform on April 4. On April 6, NJ MSA participated in a rally in Liberty State Park, and NJ MSA member Jennifer Villagomez, owner of La Ideal Bakery in Bradley Beach, spoke to the crowd.

Bergen Record: North Jersey immigrants, advocates among those to join rally for reforms

In New York, Small Business United and Make the Road New York held a small business forum on immigration reform with Congresswoman Nydia Velazquez, ranking member of the House Small Business Committee, and the Queens Chamber of Commerce on April 3.

In Florida, the Community Business Association of Central Florida released the results of the MSA/ASBC survey locally in Orange County and CBA leader Ricardo McQueen, owner of Food, Health and Environmental Safety and a local church leader, helped lead a prayer vigil outside a local congressional office on April 4.

In Colorado, the Colorado Main Street Alliance and Colorado Progressive Coalition organized an event at an immigrant-owned small business in Pueblo on April 4, releasing the results of the MSA/ASBC survey. The event was covered by the Pueblo Chieftain and two local TV stations.

In Washington, the Main Street Alliance of Washington hosted a press conference at the Spokane Public Market in Spokane on April 4.  The event – featuring small business owners and attended by members of TV, radio, print and new media – was the culmination of a four-day storefront poster campaign that brought together over 120 small business owners from across Spokane.

Small business owners are making their voices heard in the immigration debate, and their message is clear: small businesses want immigration reform that creates jobs and boosts customer demand on Main Street, and that means reform with a roadmap to citizenship for current and future immigrants.