The deficit crowd cheered when the President included a concept called “Chained CPI” in his 2014 Budget.

This is a proposal to change the way the Consumer Price Index (CPI) is calculated. This change is about as wonky as wonk-dome can get, but here’s a try.

Currently the CPI grows based on overall increases in the cost of goods. The new idea is to calculate how much consumers change their purchasing habits when prices rise. If there is an increase in the cost of Stella Artois, then some beer drinkers will switch to less expensive brews. Say they turn to my favorite, Tecate.

This tendency to switch choices will be calculated as a part of the new Chained CPI. So the effect of the change will be slowly to reduce the benefits paid out through programs like Social Security. Now you may think that switching from Stella to Tecate won’t amount to much.  But it keeps growing over time. The COLA for this year was 1.7 percent. If my monthly Social
Security check was $1,250 last year, it increased to $1,271.25 this year.  Were the Chained CPI in effect it would be $1,267.50, amounting to $45 less a year. Again, that might not seem like a big reduction, but if the COLA is the same next year, the difference increases to $91.32 for the next year. And as the SSI checks get smaller and smaller, inflation will drive prices higher.

The cumulative effects of the change will have severe effects on the poor and the elderly. Two populations that already have few choices on how they spend their money, especially in the all-important areas of health care and pharmaceuticals.

There are also some very specific problems with the new plan, particularly for those who have no retirement support other than Social Security.

Chaining the CPI may also amount to a subtle tax increase for the middle class, assuming that the new method will be applied to the way IRS calculates tax brackets. Over time, the brackets will rise more slowly and, as incomes gradually increase, folks will slip more quickly into higher brackets.

How the Numbers Add up, and not for the Best

The really big problem with Chained CPI, and the point of this essay is that reducing Social Security is simply a bad idea in general.  The plain fact is that the growing income inequality, a severe recession and wage stagnation have created an enormous “retirement security gap.” This gap is the difference between what people should have saved for retirement and what they actually have.

The HELP Committee of the U.S. Senate estimates the retirement gap at $6.6 trillion. Half of Americans have less than $10,000 in savings. Then throw on top of this the $1 trillion in student debt. Whoa. We’re getting into real money here. How are we going to close this gap?

The Solution is the Same Program They are Attacking

Well one obvious way is to expand Social Security and Medicare so that they can help fill up the bucket. Instead, our political leaders all seem intent on making the gap worse. The bucket isn’t full enough so let’s poke a hole in the bottom.  “Let’s chain down that CPI!” say these deficit hawks.

Why?  When Social Security has zip to do with the deficit (and Simpleton and Blows know it)? Besides, ‘fixing’ this problem will not make the austerity preachers happy. The “Fix the Debt” corporate tax dodgers and the right-wingers simply want to dismantle the social insurance system.

And the Democrats have taken the bait. Rather than support expansion of these vital programs, many Democrats, including apparently the President, have joined the rush to austerity in a recession and are buying into a compromise with an ideology that rejects physical fact, economic science, and the idea that government can be an instrument to advance the common good.

Give me a break!

There is much to appreciate in the President’s Budget, but the Chained CPI is not one of them. Beyond opposing this bad idea, progressives should 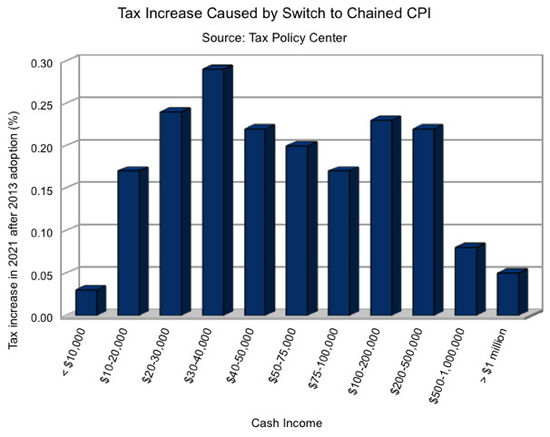 go on the offensive.  Social Security and Medicare need to expand not shrink.