A week ago, to the day, the Alliance for A Just Society hosted our 2013 Summer Conference with all our national affiliates (#Justice2013). There was no better way to kick it off than taking close to 200 participants into Washington DC and hosting three separate actions on the Hill.

As of this year, we are proud to note the following states affiliated with the Alliance for a Just Society and Main Street Alliance: Washington, Oregon, Idaho, Nevada, New York, Virginia, Michigan, Ohio, Iowa, Maine, Florida, Colorado and Connecticut. 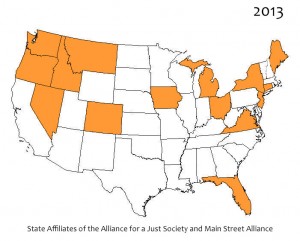 The morning of July 18 began with The Main Street Alliance hosting a forum on “Too Big To Fail”—addressing the policy conundrum where favors are given to Big Banks at the expense of the common good. Senator Sherrod Brown (D-Ohio), FDIC Vice Chairman Thomas Hoenig, economist Simon Johnson, and a panel of small business owners and policy experts each spoke of the need for renewed attention to megabank limits in order to stabilize the financial system and support the Main Street economy.

“For too long, our nation’s policies have focused on expanding Wall Street at the expense of investing on Main Street,” said Senator Sherrod Brown (D-Ohio). “It’s time we end the taxpayer-funded subsidy that Wall Street megabanks receive as a result of their too-big-to-fail status.”

Simultaneously, the Alliance for a Just Society hosted a Town Hall in the Senate Budget Committee Hearing Room where grassroots voices from Iowa, Ohio, Montana, Washington and Maine addressed the need to lower healthcare costs by negotiating drug prices under Medicare Part D. Senator Rockefeller’s aide Havi Glaser remarked, “Negotiated pricing is not going to bring the pharmaceutical industry to its knees.”

“I have spent my life fighting for the family farm. Until I realized that there was another issue: healthcare. My wife and I are considered uninsurable. We will have to pay $16000 this year in deductible. This should be an embarrassment,” said Chris Petersen, an Iowan family farmer.

By the afternoon, 150 people gathered in the halls of the Longworth Building to engage the Office of the Speaker of the House (follow the link to Univision TV coverage) on the need for comprehensive immigration reform. The lead team of 5 speakers addressed Boehner’s Chief of Staff, Mick Krieger, as  the other participants swelled around the conversation, effectively making it impossible for Krieger to leave the  conversation. As the presentations came to an end, Capitol police began breaking up the action, but the energy among the participants grew exponentially as they trickled out to various offices and addressed their respective Representatives and Senators on Medicare, Immigration and bank reform.

At night, the Alliance celebrated its 20th anniversary with several of our favorite allies speaking kind words about our dedication to grassroots organizing, our tenacity at holding elected officials accountable for their actions, and our commitment to social justice. Hundreds gathered to hear special keynote remarks by Deepak Bhargava of Center for Community Change and a heart-felt message by Alliance Board Member Deana Knutsen (also a member of Washington Community Action Network) in recognition of the Alliance for a Just Society’s life time of service in furthering partnerships that address economic, racial, and social inequities.

The following day participants engaged in discussions of understanding the political moment, of framing stories and developing a narrative for their campaigns. They learned how to develop and conduct statewide polls and other skills building exercises for fieldwork, for understanding the political context of their work and in building camaraderie among leaders and affiliates. .  Sessions addressed topics such as the political moment, money in politics, immigrants and the Affordable Care Act, civic engagement post recent Voter’s Reauthorization Act decision, and the Indian Child Welfare Act.

Our goal was to strengthen issue campaigns through political education and collective action, and by any measure, we met that vision.

The 2013 Summer Conference and 20th Anniversary Celebration was a reflection of what the Alliance has accomplished in the past, and created a vision of what our future will be. The Alliance for a Just Society remains committed to moving forever forward—taking action and making change.