The grape boycotts organized by the United Farm Workers in the late 1960s were part of a groundbreaking strategy to engage consumers in the fight for fair treatment for immigrant farmworkers. Fast forward to 2013, and groups in Colorado campaigning for economy-boosting 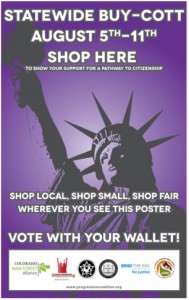 The website for the Colorado Statewide Buy-cott explains the basic idea driving the effort: “Vote with your wallet and shop at local businesses that support comprehensive immigration reform with a path to citizenship!”

And that’s exactly what residents of Denver, Aurora, Pueblo, Greeley, Longmont, Ft. Morgan, Grand Junction, Durango, Glendwood Springs, Carbondale, Aspen and other cities and towns across Colorado are doing from August 4-10: they’re putting their spending money to work in local businesses whose owners have declared their support for immigration reform with a path to citizenship.

The statewide buy-cott is a joint effort of a range of Colorado-based groups, including the Colorado Main Street Alliance, Colorado Progressive Coalition (CPC), Rights for All People (RAP), Colorado National Association for the Advancement of Colored People (NAACP), Bend the Arc, and Colorado Immigrant Rights Coalition (CIRC).

The participating organizations announced the buy-cott with a series of local press events around the state on July 29. The idea has clearly caught on: nearly 400 local businesses across the state have signed on to the effort and put up a poster in their business windows declaring their support for immigration reform with a path to citizenship.

The buy-cott has generated lots of local press coverage, too, including in major papers like the Denver Post and in smaller local papers and media outlets across the state.